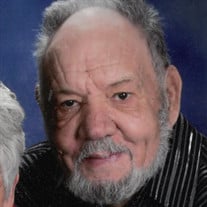 John “Jack” A. Kalata who was born in 1936 in the Town of Belmont, Portage County, WI passed away late Saturday (6/5/21) evening at Maple Ridge Memory Care in Plover, WI. In 1955 he graduated from Almond Bancroft High School and then enlisted in the United States Navy and served from 1956 to 1959. After his military service, Jack briefly worked for Swift fertilizer in Almond. While working at the Kiekhaefer Box Factory in Wild Rose, Jack met the love of his life Patricia and they were married for the last 55 years. He also worked for the Portage County Highway Department for 23 dedicated years from 1973 until his retirement in 1996. And he was known for his great collection of hubcaps accumulated while walking and working the roadways & highways of Portage County during his employment. Jack enjoyed the serenity of the outdoors and was an avid hunter and fisherman. Pat and Jack relished portaging, tent camping and fishing on the Canadian Boundary Waters. He also took his family up north often while camping, canoeing and fishing since he appreciated the Turtle Flambeau Flowage area near Springstead, WI. After his retirement, Jack was able to enjoy a few fishing and hunting trips to Canada with his son (Jeff) and some Northwoods WI camping & off-road racing trips to Crandon with his daughter (Becky). Jack was born to the late Philip P. Kalata, Sr. and Anne M. (Zalewski) Kalata. He is survived by his wife, Patricia M. (Harris) Kalata and his son, Jeffrey Brian Kalata (Erin J. [Burling] Kalata) and his daughter Rebecca “Becky” Louise Kalata all of Almond, WI; and 3 step grandchildren Samuel Spohn, Alexandria (Thomas) Sachs, and Isaiah Spohn; his brother Philip P. Kalata, Jr. (Eldean Kalata); and many nieces, nephews and cousins. Jack’s oldest brother Jim Kalata and his sister-in-law Juanita (Henke) Kalata both preceded him in death. A Funeral Mass will be held at St. Maximilian Kolbe Catholic Church on Highway 54 located east of Plover on Friday, June 11, 2021 at 1:00 PM. A visitation will be held at the church on Friday from 11:00 AM – 1:00 PM. Burial will be at Hope Cemetery in the Town of Belmont following the mass on Friday afternoon. The Hardell-Holly Funeral Home of Almond is assisting the family with arrangements.

The family of John (Jack) A. Kalata created this Life Tributes page to make it easy to share your memories.

Send flowers to the Kalata family.