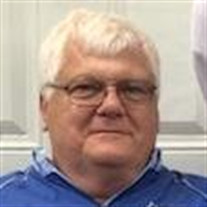 John Charles Pitt, a lifelong resident of Amherst, passed away at his home on September 26th, 2019. John was born on January 13th, 1947 to Pat and Connie (Kostuch) Pitt in Stevens Point. John married Judi Suski on October 7th, 1967. They had two children Jay (Sue) Pitt and Jill (Wayne) Groshek. John was preceded in death by the love of his life, Judi, his father, Pat, his brother, Roger, an infant sister Mary and his mother and father-in-law Leonard and Ann Suski. John was a millwright at Consolidated Papers/Stora Enso for over 35 years. He retired in 2003 to ‘get the hell out’ and to take care of his ailing wife. He was an avid duck hunter and was a founding member of the Tomorrow River Chapter of Ducks Unlimited. John was a man of many strong opinions which he was never afraid to share. He took great pride in supporting his kids, their spouses, and his grandkids. One of his favorite pastimes was supporting his grandkids in all of their sports and activities. Rarely did he miss a game. His love for the blue and white (not black) of the Falcons was unwavering. He loved all Amherst athletes as if they were his own. All of Amherst was his family. John is survived by his son, Jay (Sue) Pitt and their children Jenna (Ryan) Mielke and Jaimee Pitt and Trace Ludeman, his daughter Jill (Wayne) Groshek, and their children Garth, Garrett and fiancé Carly Sowiak, Ashley and Bryan. His mother, Connie and his sister, Karen (Robert) Ostrowski and several nieces. He is also survived by his special friend, Sally Woyak. A memorial gathering will be held on Tuesday October 1, 2019 from 12 noon until 3 P.M. at the Jungers-Holly Funeral Home in Amherst. Burial of cremains will take place at Greenwood Cemetery. In lieu of flowers, the family has established a scholarship in his name.

John Charles Pitt, a lifelong resident of Amherst, passed away at his home on September 26th, 2019. John was born on January 13th, 1947 to Pat and Connie (Kostuch) Pitt in Stevens Point. John married Judi Suski on October 7th, 1967. They... View Obituary & Service Information

The family of John C. Pitt created this Life Tributes page to make it easy to share your memories.

John Charles Pitt, a lifelong resident of Amherst, passed away...

Send flowers to the Pitt family.