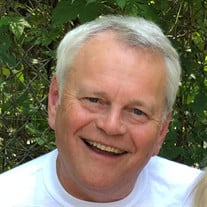 On Wednesday, November 24, 2021— John Robert Stange passed away at the age of 70. Born in 1950 to Bob and Lois Stange of Waupaca, John will be deeply missed, and undoubtedly remembered for his passion for running a small business, his unwavering dedication to his family, and his love for telling a chuckle-worthy joke to just about anyone. Remember those catchy TV jingles for Stange’s of Waupaca years ago? “Stange’s… when you want the very best!” Those tunes, lyrics, and the heart behind them was 100% John Stange. When asked how he handled the ups and downs of running a small business, his family will tell you, “He was the business.” As the President of Stange’s of Waupaca (a 69-year-old family-owned and operated furniture store in Waupaca) John took his role seriously, and he loved it. If you stepped inside the store’s Washington Street entrance, you could walk downstairs to find John in his favorite section, amongst the Stressless Chairs. He had an undeniable knack for helping a customer find the perfect fit — every time. As the eldest son of three, John, his sister Karlene and brother, Mark, all grew up in Waupaca. John was an Eagle Scout who was known for his success on the high school curling team, including a state championship title. He never stopped playing throughout college at UW-Madison, nor after moving back to Waupaca; John spent two nights a week, nearly every week — November through March— curling at the Waupaca Curling Club. When he was curling, he could laser focus his attention on the game, and he loved strategizing his next move. That tenacity and focus on the ice mirrored the full attention he gave to his family. In 1974, on a serendipitous evening at The King’s Roost, John — with his swanky pony tail and mutton chop sideburns — crossed paths with Elizabeth (Liz) Copps. Although the two didn’t begin dating the night they met, there was an undeniable connection that brought them together years later, and the pair was married in 1980. Although he eventually let go of the pony tail and facial hair, John never wavered from his deep love and contagious, unabashed affection for Liz. Liz and John had two children, 15 months apart: Bill, in 1984 and Lisa, in 1985. Growing up with John as Dad meant many things, but the most memorable: He would make up songs that made mundane tasks like pushing in the dining room chairs after dinner and reminding the kids to flush the toilet fun— and unforgettable to this day! Also: Green Bay Packer game days were sacred; he would often say not being a packer fan was a sign of a poor father figure. And, if you needed someone level-headed to help solve a problem, John would be there for you every time. Years later, John poured that same light-hearted energy into his relationships with his grandchildren, whom he loved dearly. He could often be found on the floor with the kids, speaking their language, playing their games, and making the best forts anyone has ever seen. When not playing with the grandkids John enjoyed tending to his tomato garden on wheels and having a cocktail on the dock while admiring the view with Liz. Everyone who knew John will remember him as a loving husband, proud father, devoted grandfather, and a talented businessman. If you heard a joke or two from John, then you’re likely to get a laugh recounting the tale. His thoughtful presence, sense of humor, and warm smile spoke volumes to the man he was, and the man we will never forget. John was preceded in death by his parents Lois and Bob Stange and his niece Mara Stange. He is survived by his wife, Elizabeth Stange, their two children — Bill Stange (Evonne Stange) and Lisa Jauch (Dave Jauch), 5 grandchildren, Lilly Jauch, Chloe Jauch, Jackson Jauch, Henry Stange & Amelia Stange, his sister, Karlene Stange (Robin Boucher), and brother Mark Stange (Lehann Stange and Aleisha Hammond). A memorial service will be held in Waupaca on Thursday, December 2nd at Holly Funeral Home in Waupaca. Visitation 1-3 pm, service to follow at 3 pm. In lieu of flowers the family has requested that donations be made to the Waupaca Curling Club.

On Wednesday, November 24, 2021&#8212; John Robert Stange passed away at the age of 70. Born in 1950 to Bob and Lois Stange of Waupaca, John will be deeply missed, and undoubtedly remembered for his passion for running a small business, his... View Obituary & Service Information

The family of John R. Stange created this Life Tributes page to make it easy to share your memories.

Send flowers to the Stange family.