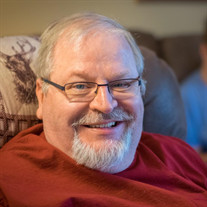 John L. Sward, age 66, of Waupaca, WI, passed away on January 6, 2022, at ThedaCare Regional Medical Center – Appleton, WI following several months of declining health. He was born on August 6, 1955, in Stevens Point, WI to Lyal and Germaine (Zynda) Sward. On July 17, 1998, John married Janeen Barton by the Red Mill in the Town of Dayton. John worked for many years at Ministry Home Care in Stevens Point in the medical supply field before suffering a stroke in 2014. He was a member of the Maple Street Church of Christ in Waupaca, WI and enjoyed camping, model trains, trucks, and traveling to the West coast. John is survived by his loving wife, Janeen, his 3 children - Heidi (Jerry) Hallstrand, Nathan (Mackenzie) Sward, Kathy (Scott) DuQuaine, 2 stepchildren - Lindsey Barton and Nick Barton, 7 grandchildren - Noah Hammerstad; Hannah, Alexa, and Liam DuQuaine; Elinor, Josephine, and Gianna Sward, and 3 nephews - Scott, Craig, and Troy Kosobucki. He was preceded in death by his parents, Lyal and Germaine Sward and sister, Bonnie Kosobucki. A funeral service will be held at the Holly Funeral Home in Waupaca, WI on Wednesday, January 12, 2022, at 11:30 a.m. with visitation starting at 9 a.m. Burial will be in Lakeside Memorial Park in Waupaca, WI.

The family of John L. Sward created this Life Tributes page to make it easy to share your memories.

Send flowers to the Sward family.