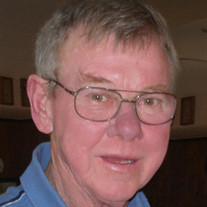 For God so loved the world that he gave his one and only Son, that whoever believed in Him shall not perish, but have eternal life. Jon J. Krogwold, age 74, Amherst, entered into God's Kingdom on Sunday, November 7th, 2021. He was born in Portage County, Wisconsin on April 20, 1947, a son of the late Lawrence and Lorraine (Stenson) Krogwold. He attended school in Amherst, graduating from Amherst High and attended Northland College in Ashland, WI. Jon married the love of his life, Susan Lea on May 13, 1967 at Peace Lutheran Church in Amherst. He then settled in the area and operated Lorry Farms along with his family. At this time, he began service to the community as a Lifetime member of the Tomorrow River Lions Club. While a member, it gave him great joy to bring back youth baseball to the area, with the help from the Club and many other local leaders. Jon also taught Sunday school and was on the church council for many years. Jon was also a member of the Tomorrow River School Board for 11 years. He was a member of Peace Lutheran Church in Amherst. Jon and Susan loved to travel and were able to see many places across the globe. Jon also loved to see his grandchildren and attended sporting events when able. Jon held a special place in his heart for the shack in the Northwoods. Jon is survived by his Wife: Susan; Son: Kevin (Sandy) and their children, Calvin (Cindy), Seth and Chelsea (special friend - Wesley); Son: Kyle (Beth) and their children, Paige and Grant; Son: Kraig (Amy) their child, Zachary (Krystal) and their children, Everett and Westen; Brothers: Lonnie (Jo) and Brian (Lynda). He was preceded in death by his parents, an infant child, Lorry, his sister - Sonja Olson and brother-in-law - Harvey Olson and two infant brothers. A Memorial Service will be held at Peace Lutheran Church in Amherst at 12:30 PM on Friday, November 12th, 2021, with Rev. Dwight Anderson, officiating. Memorial Visitation will be held on Friday, from 9:30 AM until the time of the service at the church. The Jungers-Holly Funeral Home of Amherst is assisting the family with arrangements.

For God so loved the world that he gave his one and only Son, that whoever believed in Him shall not perish, but have eternal life. Jon J. Krogwold, age 74, Amherst, entered into God's Kingdom on Sunday, November 7th, 2021. He... View Obituary & Service Information

The family of Jon J. Krogwold created this Life Tributes page to make it easy to share your memories.

For God so loved the world that he gave his one and only Son,...

Send flowers to the Krogwold family.