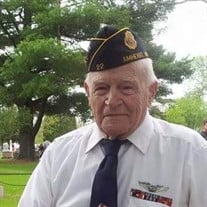 Joseph A. Brouillet, age 91, of Amherst, WI, passed away peacefully surrounded by his daughters on Wednesday, October 23, 2019 at the Wisconsin Veterans Home in King, WI. He was born June 22, 1928 in Juneau, Dodge Co., WI; son of Albert and Genevieve (Hess) Brouillet. Joe was raised in simpler times by loving parents and faced each day with a lust for life. His adventurous spirit continued when he joined the Army Air Corp on his 18th birthday. As a flight engineer, he proudly served the duration of the Berlin Airlift and during the atomic bomb testing in the Marshall Islands. Joe loved serving his country and was able to see the world. It was on leave that he proposed to the love of his life. On December 29, 1951, Joseph married Margaret (Dolly) Quigley in New Berlin, WI and together they shared 54 years of marriage before her passing on January 13, 2006. When his beloved Dolly needed a caretaker there was never any doubt who that would be. Family was paramount for Joe. His family, extended family and friends were recipients of his generosity and support; he never let his loved ones down. As a man of many talents, there wasn’t anything he couldn’t do. Joe was a woodworker, mechanic, gardener and the ultimate improviser. When it came to sports there was only one, racing, anything: cars, planes, boats, lawnmowers, etc. He was fiercely independent and throughout life was driven by his faith and love of family and country. Joe will be dearly missed by all of his loving family and friends. Joe is survived by three daughters, Patricia (Carl) Matusiak of Goodyear, AZ, Judith (Paul) Bergquist of Brookfield, WI, and Genevieve (Bechir) Moussa of Mason, OH; ten grandchildren, Adam (Meena) Duerson of Brooklyn, NY, Gene Koch of West Milwaukee, WI, Matthew (Carina) Koch of Green Bay, WI, Dustin Duerson of Denver, CO, Carynn (Mario) Noriega of Milwaukee, WI, Justin (Crystal) Bergquist of Chicago, IL, Rachael (Matthew) Ellis of De Pere, WI, Ahmed Moussa of Hamilton, OH, Anissa Moussa of Mason, OH, and Lauren (Joe) Batoha of Minooka, IL; eleven great-grandchildren, Gustavo, Julieta, Liam, Eli, Isabel, Carlo, Finn, Bear, Hart, Mila, and Raegan; two siblings, Joan Walleser of Lansing, IA and William Brouillet of King, WI; and also by numerous nieces, nephews, other relatives and friends. He was preceded in death by his parents, Albert and Genevieve Brouillet; his loving wife, Margaret Brouillet; a daughter, Mary Brouillet; and five siblings, Cecilia, Mary, Helen, Leo, and Rita. A Memorial Mass will be on Saturday, November 2, 2019 at 12:00 Noon at St. James Catholic Church in Amherst, WI. Father Dan Hackel will preside. A visitation will be held on Saturday morning from 10:00 AM until the time of the mass at the church. Burial will be at St. James Catholic Cemetery in Amherst following the mass on Saturday where full military honors will be performed. The family would appreciate you to direct any memorials, in the form of time, talent or treasure, to your local veterans’ services organization or food pantry. The Jungers-Holly Funeral Home of Amherst is assisting the family with arrangements. The family would like to thank his loving care team at the Wisconsin Veterans Home in King, WI.

Joseph A. Brouillet, age 91, of Amherst, WI, passed away peacefully surrounded by his daughters on Wednesday, October 23, 2019 at the Wisconsin Veterans Home in King, WI. He was born June 22, 1928 in Juneau, Dodge Co., WI; son of Albert and... View Obituary & Service Information

The family of Joseph A. Brouillet created this Life Tributes page to make it easy to share your memories.

Joseph A. Brouillet, age 91, of Amherst, WI, passed away peacefully...

Send flowers to the Brouillet family.