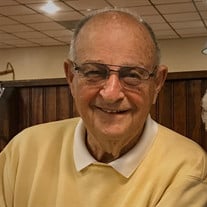 Early on the 4th of July, 2020, Joseph Gerard Hanegraaf passed away at the age of 90. Born in 1929 to Cornelius "Casey" and Elizabeth "Betz" Hanegraaf of Little Chute, Joe lived a full life and leaves behind an incredible legacy for which he will be remembered annually with copious fireworks, Old Fashioned cocktails, and most importantly: family gatherings - which he loved most. It's no coincidence that during this same time of year 68 years ago, Joe's life forever changed when a mutual friend introduced him to Mary Wenzel. The pair hit it off, and after dating in earnest, Joe's father asked jokingly, "Mary: Do you mind not keeping him out so late?!" The rest was history. The pair were married on July 25th, 1953. In the years that followed, Joe became a co-owner of the Wenzel family's mechanical contracting business, Wenzel Brothers Plumbing. He moonlighted as an entrepreneur on nights and weekends, running a drive-in restaurant in Little Chute called Bridgeway Drive-In. Joe and Mary called Kimberly home for over 7 years, and brought four children into their lives during that time. It was then Joe also served in the United States Army for 5 years. He remained a lifelong member of the Little Chute American Legion. Upon taking a job with Azco in the mid-60s, Joe and family moved to Appleton where he and Mary welcomed their fifth child to the bunch. As the family grew older, Joe and Mary spent more and more time on Long Lake, Waushara County, where socializing on the water and in the nearby Waupaca community became part of their routine. Joe loved being part of the Long Lake Sailing Club, though he would be the first to admit he wasn't the most talented sailor on the lake! It was fun, challenging, and afforded him an opportunity to be on the water with his kids. The pair had a family home there for 18 years. As their children had children, Joe's favorite memories were winter ski trips to Colorado and the Upper Peninsula. He and Mary cultivated a love for family snow activities, which was passed down through the generations. For 20 years later in life, Joe and Mary spent winters in Sebring, Florida, and returned to Wisconsin to spend summers with family. In all communities that Joe touched during his life, everyone will remember him as a devoted father and husband, a generous friend, and a proponent of spending social time with family and friends. He was the guy who walked into Simpsons in Waupaca and would ask the bartender to "Sprinkle the Infield," buying a round of drinks for everyone at the bar. His signature, energetic greeting as he lifted his glass in your direction - "EHYYYYY!" - will be missed, emulated by those who loved him, and never forgotten. Joe is survived by his wife, Mary Hanegraaf, their five children - Mary Jo Shambeau, Ellen Berman, Jim Hanegraaf, Joan McCarville, and Thomas Hanegraaf - and their respective partners and families, including 12 grandchildren and 6 great-grandchildren, also 2 sisters, Betty Flanagan and Lou Bressers. He was preceded in death by his parents, a sister, Celine Rippl and 2 brothers, Greg Hanegraaf and Jack Hanegraaf. A private graveside ceremony will be held at St. Joseph's Cemetery in Appleton this month. In lieu of flowers, the family has requested that donations can be made to Riding On Insulin - a nonprofit organization co-founded by Joe's granddaughter and her husband to share snow sports with kids who live with type 1 diabetes. Visit www.RidingOnInsulin.org. The family would like to extend a special "Thank You" to the wonderful staff at Bethany Home, for their kind and compassionate care, especially, Casey.

Early on the 4th of July, 2020, Joseph Gerard Hanegraaf passed away at the age of 90. Born in 1929 to Cornelius "Casey" and Elizabeth "Betz" Hanegraaf of Little Chute, Joe lived a full life and leaves behind an incredible legacy for which he... View Obituary & Service Information

The family of Joseph G. Hanegraaf created this Life Tributes page to make it easy to share your memories.

Send flowers to the Hanegraaf family.