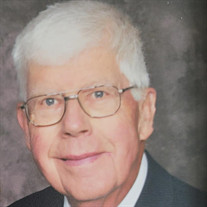 It is with a heavy heart and yet celebration of the joys our Lord provides that we share the news of our beloved Patriarch’s passing to the Heavenly Gates. On February 2, 2022, Joseph Sidney Leean, age 79, passed suddenly, but without suffering into the hands of his Savior. Joe was a warrior for the Lord, a devoted husband of 57 ½ years to Ginny, dedicated and loving father to Dawn, Miriam and Jana, and a grandfather extraordinaire to Jenna, Brooklyn, Marisol, Danica, Matthew, Catelyn and Jonathan. His reward for raising 3 daughters was his wonderful, talented sons-in-law, Monte, Bret and Kurt. Joseph was born on March 10, 1942 into the hands of Sidney and Marie Leean in Iola, WI. He graduated Salutatorian in 1960. He attended Augustana College in Sioux Falls, SD where he met his East Coast bride. It was love at first sight. They had adventures, successes and failures, but Joe never lived in the past and kept moving forward. He started his teaching career in Waupaca as a high school math and physics teacher. He spent summers working at Ding’s Dock until he purchased the business in 1973. He owned and operated Ding’s Dock/Casino for a decade. During that time, he and Pat Meighan purchased and renovated the boat that is now the Chief Waupaca, fulfilling a dream of bringing a unique tour boat to the Waupaca Chain O’ Lakes. He expanded the Ponderosa into Fort Waupaca with live train robberies, shops, electric cars and boats. Service was his forte. He and other business leaders from Waupaca co-founded Shepherd of the Lakes Church. He served as the President of the Chain O’Lakes Sanitary District from 1978-2001, which developed the sewer system that has kept the lakes he loved crystal clear. He was elected to the Wisconsin Legislature, built a waterslide, and created a petting zoo themed park. He served the Wisconsin 14th Senate District from 1985-1995 with dignity and integrity. He left the Senate to head the Department of Health & Family Services for six years. Finally, in 2001 he served as a consultant to Secretary Tommy Thompson at the Department of Health and Social Services in Washington, DC. After a lifetime of business adventures, 16 years in the Wisconsin government, and after raising his three daughters, he “retired” and spent the next 20 years traveling and snow-birding in Florida with his bride. He would say after 6 careers, retirement was just as grand! Family was the heart of his existence. He also loved to tinker and build in his shop. If he wasn’t there, he was probably at Fleet Farm. He could fix anything. He was the “Jack of all trades and the master of nearly everything.” His favorite pastime was taking evening dinner cruises with his wife and family on the Senate Chambers paddle wheel boat. Joe is preceded in death by his parents, Sidney & Marie Leean, sisters Elaine (Leean) Holte, Ann (Leean) Muyskens, brother Arch Leean, niece Sharon Leean, siblings-in-law Vern Holte, George Melby, Dave Muyskens and Mary Leean. He is survived by his beautiful wife, Virginia “Ginny” (Floor) Leean, daughters Dawn (Monte) Johanknecht, Miriam (Bret) Leean-Rodenz and Jana (Kurt) Swenson and 7 grandchildren, Jenna, Brooklyn, Marisol, Danica, Matthew, Catelyn and Jonathan. He is also survived by sisters Jean (Leean) Melby, twin Connie (Leean) & John Seraphine and Darleen (Leean) & Randy Armstrong. Many nieces and nephews and generations beyond are also survived and loved by Uncle Joe. We thank the Amazon driver, the Sheriff Deputies, neighbors, EMS and hospital staff for their valiant efforts. A Celebration of Joe’s Life will be on Wednesday, February 16, 2022 at 1:00 PM at Trinity Lutheran Church, 206 E. Badger Street, Waupaca, WI 54981. Joe’s service will be available live-stream at click here. A visitation will be held on Tuesday evening, February 15th, from 4:00 – 7:00 PM at Trinity Lutheran Church and again on Wednesday from 11:00 AM – 1:00 PM at the church. In lieu of flowers, a memorial has been established in his name. The Holly Funeral Home of Waupaca is assisting the family with arrangements.

It is with a heavy heart and yet celebration of the joys our Lord provides that we share the news of our beloved Patriarch&#8217;s passing to the Heavenly Gates. On February 2, 2022, Joseph Sidney Leean, age 79, passed suddenly, but without... View Obituary & Service Information

The family of Joseph S. Leean created this Life Tributes page to make it easy to share your memories.

It is with a heavy heart and yet celebration of the joys our...