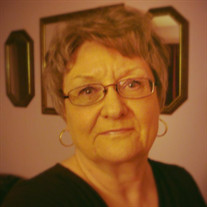 Karen Ilene (Strahl) Malone, age 74, passed away unexpectedly on Friday, January 17, 2020. She was born on November 11, 1945 to James "Howard" and Florence Strahl in Randall, MN. The family later moved to Sheboygan, WI. After graduating from Sheboygan South High School, she began her career working in sales & marketing. For many years, Karen worked at The Waupaca Foundry and Tran Star in Waupaca, where she formed many close friendships that she treasured until her passing. Most recently, she worked at the Party City and Fleet Farm corporate offices in Appleton, WI before she retired. Not surprisingly, with every professional move she ever made, lifelong friends were added along the way. Her welcoming, fully accepting approach to life pulled all close to her. Her enormous heart and compassion were special and drew everyone she met in. In her younger years she loved raising and riding horses. As her family grew, she focused on her kids. She proudly cheered on her sons, supporting them throughout their teenage years. She was their wrestling team's biggest fan rooting for her boys and the entire team. There wasn't a meet that she didn't attend. She was loved by any friend of her children. To their friends who knew her, they simply and fondly referred to her as "Mom!" She was so proud of her children growing up, supporting them with everything they encountered in life. Steadfastly there, ready to listen, and always with a hug. Then, she became a Grandma, twice! She just absolutely adored her newest role. At very early ages, both of her Grandsons fell in love with playing hockey, and she fell in love with watching them. She was happiest at the ice rink. Countless hours spent supporting them and cheering them on, learning the rules of a new sport that she hadn't known before. Her favorite times were with family, cooking for the family get-togethers and spending those precious days playing games in the back yard creating smiles, laughs, and many memories. Throughout her life she was blessed with the ability to transform emotion into words. Whether through poetry, special cards, or holiday greetings, true to herself, she had a unique way to connect with people. Though often therapeutic for her, she brought comfort to those dealing with difficult times, loss, or sadness. To honor special moments in life, her words brought joy and happiness. A very special family friend described her best; "I've not known anyone with the capacity to care and love more than her. Given all that she faced, much more than most, she was able to look outside all of that and focus on those around her." For those here on earth, we have cherished our time with Karen, she was admired, loved, and will be forever missed. It's time now for us to share her with her mom, her dad, and beloved Joel, and Kaelynn in Heaven. She was preceded in death by her firstborn, Joel, and her last child, Kaelynn. Father, James Howard Strahl and her mother, Florence Strahl, half sisters, Adeline Hagar, Marie Frank, Elaine Lynch, Clara Hunter, Irene Strahl, and half brothers, Harold Strahl, Howard Strahl, Harris Refsland and Dale Refsland. She is survived by her son, Daniel Mantz (Waupaca), daughter, Dena Mantz (fiancé Andrew Lang), (Oshkosh), stepson, Ryan Reisman (Adam), (Las Vegas, NV), stepdaughter, Erin Malone (Waupaca), grandsons, Ryan Mantz and Jake Mantz (Oshkosh), sister, Virginia Griego (Roy, UT), sister, Lori Gilbertson (Sheboygan), brother Glen Strahl (Moreno Valley, CA), and half sister, Florence Bellamy, (Little Falls, MN). She is further survived by many nieces, nephews, cousins and friends. A visitation will be held on Saturday, February 8 from 3:00 p.m. to 6:00 p.m. at Holly Funeral Home in Waupaca.

Karen Ilene (Strahl) Malone, age 74, passed away unexpectedly on Friday, January 17, 2020. She was born on November 11, 1945 to James "Howard" and Florence Strahl in Randall, MN. The family later moved to Sheboygan, WI. After graduating from... View Obituary & Service Information

The family of Karen I. Malone created this Life Tributes page to make it easy to share your memories.

Send flowers to the Malone family.