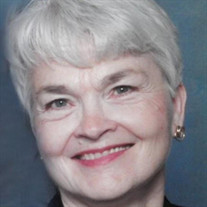 Karon Faye Mizell, formerly Karon Ruch of Plover, passed from this earth on Sunday, October 22, 2020 in Arkansas. She was born on November 9, 1940 in Norton, KS; the oldest of six children. Karon graduated high school in 1958 from McCook, NE and was a graduate of Central Business College in Denver, CO. On March 13, 1960, she married Larry Ruch in Denver, CO and they moved to Mankato, MN and then to Plover, WI in 1968. They shared 41 years of marriage before Larry’s passing on August 15, 2001. Karon was employed by First National Bank of Stevens Point, later M&I Bank where she was Assistant Vice President & Personnel Director until she retired. In the community she was active with United Way and served as Treasurer, President, and on the Personnel Committee for the Portage County Council on Alcohol & Drug Abuse; Director of Community Industries; proud member of Zonta International since 1978; and the Personnel Club since 1976. Karon belonged to the United Methodist Church in Plover where she enjoyed singing in the choir. Karon moved to Arkansas and married William Mizell on December 30, 2004. They enjoyed traveling and visiting family. She volunteered at Christmas Wish and kept busy with studying to get her pilots license and organizing family reunions. Karon is survived by her husband, William Mizell of Cotter, AR; two children, Steven (Svetlana) Ruch of Jefferson City, MO and Stephanie (William) Wallace of Almond, WI; five grandchildren, Emma and Michaela Wallace of Almond, WI & Joshua, Jessica, and Jennifer Ruch of Hickory, NC; eight great-grandchildren, Jordan, Zylah, Floyd, Xane, Zaven, Jaden, Jaylee and Joshua Jr. all of Hickory, NC; two sisters, Coleen Ellis of Alliance, NE and Sherry (Jerry) Feagins of Omaha, NE; one brother, Kenneth (Paula) Mizell of Raleigh, NC; and a sister-in-law, Gail Mizell of Pearland, TX. She was preceded in death by her parents, Kenneth and Elaine Mizell; her first husband, Larry Ruch; two brothers, Garry Mizell and Dennis Mizell; paternal grandparents, Claude and Leone Mizell; and maternal grandparents, Hugo and Anna VonSchuetz. In remembrance of Karon, the family is holding a luncheon on Saturday, November 14, 2020 from 11:00 AM – 3:00 PM at the Sky Club, 2202 Post Road, Plover, WI 54467. The family understands these are uncertain times and between them and the Sky Club, both are taking all safety precautions available for Saturday. Please RSVP by November 10, 2020 to the daughter Stephanie’s home or her email [email protected]

Karon Faye Mizell, formerly Karon Ruch of Plover, passed from this earth on Sunday, October 22, 2020 in Arkansas. She was born on November 9, 1940 in Norton, KS; the oldest of six children. Karon graduated high school in 1958 from McCook,... View Obituary & Service Information

The family of Karon F. Mizell created this Life Tributes page to make it easy to share your memories.

Send flowers to the Mizell family.