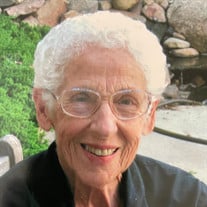 Kathryn Gwendolyn "Kitty" Wenckus Vivacious. Cheerful. Dependable. Disciplined. Determined. Maybe more than anything, she was supremely kind and considerate. And fun. That was Kitty… After 96 years of giving it her all, she passed quietly on February 9th. Kitty was born on September 9th, 1925 in Chicago Illinois, the only child of Benjamin and Catherine (Walsh) Raymond. She was a 1942 graduate of South Shore High School, where she was an honor roll student, cheerleader, and natural performer. A classic child of the Great Depression, she had very little in the way of material possessions, but learned how to make do with, and appreciate what she did have. She exemplified great character and integrity, and her core values of honesty, hard work, self-discipline, and good humor enabled her to cope and endure. These qualities also served as a foundation to provide a better life for herself and her family, following her marriage to Adam Wenckus in 1947. They met while both worked for United Airlines during the early days of commercial aviation. Six years later, they would purchase "The Farm", in Waupaca Wisconsin. Although it was a dilapidated property not unlike the Green Acres television show, it was their first house and they saw the potential in it. A career change for Adam resulted in another decade of frequent moves, but they would return to The Farm every summer and it would always be considered home. Kitty then spent the following two decades in Richmond Virginia, where they would raise their family. Her love of music led her to work many years for the Richmond Symphony, while devoting her summers to being a life guard and water safety instructor. Upon Adam's retirement from government service, they returned to the family home in Waupaca, where she occupied herself with, among other interests, needlepoint, German lessons, Jerry Knoepfel's opera trips, lending her beautiful voice to church choir and Community Chorus, swimming, and genealogical research. She was delighted to discover she descended from medieval French royalty and could include in her family tree the artist, Toulouse-Lautrec, and the pirate, Jean Lafitte. Kitty believed deeply in civic responsibility and took great pride in having never missed an election. She was a poll worker for the Town of Farmington for many years and was a regular at Town, County and Highway Department meetings- and was immensely gratified by the ultimate reconstruction of the infamous 'Dead Man's Curve'. She enjoyed the company of her cats, the smell of carnations, and especially, the taste of chocolate. Besides swimming and enjoying opera, Kitty loved to sing and dance- and talk! She was never shy about chatting with anyone she encountered, and in later years many people knew her simply as 'the lady who waved to everyone from the end of her driveway'. Our sincere thanks to everyone who waved back, smiled, listened to her stories, and treated her with kindness, patience, and respect. Her family would like to express again their deep appreciation for the tireless efforts of the Waupaca County Sheriff's Department and the countless first responders and community volunteers who assisted during Kitty's 2018 Silver Alert. Special acknowledgements must also be given to the amazing staff at Ainsworth Hall and support teams at the Wisconsin Veterans Home in King, who provided the most exceptional care, concern, and emotional support during the past three years. Also, many thanks to the hospice team from ThedaCare for their guidance and commitment to mom's comfort during her final weeks. Kitty was predeceased by her parents, her husband Adam, who passed in 1991, and her oldest son Allan. She is survived by her daughter, Susan, and son, Philip, both of Waupaca. Additionally, she is survived by her wonderful nieces, Barbara Dunn (Ed), Mary Enochs (Willy), and Joanne O'Connor (Mike), along with her grand niece Elizabeth Perry (Nate), and grand nephews, Matthew Dunn, Patrick Dunn, Alex Enochs, and Ryan O'Connor. Unfortunately, due to Covid-19 concerns, there will not be a public visitation at this time, a Celebration of Life will be held at a later date. The Holly Funeral Home of Waupaca is assisting the family with arrangements.

Kathryn Gwendolyn "Kitty" Wenckus Vivacious. Cheerful. Dependable. Disciplined. Determined. Maybe more than anything, she was supremely kind and considerate. And fun. That was Kitty&#8230; After 96 years of giving it her all, she passed quietly... View Obituary & Service Information

The family of Kathryn G. "Kitty" Wenckus created this Life Tributes page to make it easy to share your memories.

Send flowers to the Wenckus family.