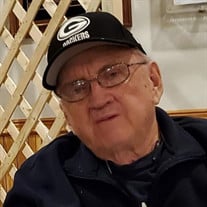 Kay W. Plamann, Wisconsin Veteran’s Home at King, passed away on November 20th, 2020 after a brief illness. He was born November 7th, 1935 in Cicero, Wisconsin. He was the son of the late Emro and Caroline (DeWall) Plamann. On July 20th, 1963, he married Nancy L. Wardijan in Appleton, WI. She preceded him in death on July 5th, 2012. They raised 3 children in Appleton until heading to Wausau, WI in 1979. Kay was a proud veteran of the Korean War and treasured his time in the military. After the military, he pursued some college courses and eventually started his career in retail management, working for the Kmart Corporation, running stores in several cities across the country, retiring in Wausau. Kay and Nancy then started a second chapter by establishing and operating Pioneer Falls Adventure Golf in Waupaca after relocating to Amherst Junction. Kay loved his Wisconsin sport teams, loved to golf and spend time with his family whenever he could. Kay is survived by his 3 children, Melody (Randy) Brandt, Wausau, Kurt (Teresa) Plamann, Waupaca, and Scott (Libby) Plamann, Kronenwetter. He is further survived by 9 grandchildren, Matthew, Joshua and Sarah (Zach) Brandt; Andrew (Carly), Zachary, and Karlos Plamann; Patrick (Melissa), Jake and Kourtney Plamann; 2 great grandchildren, Mason and Kylie Kempf; his brothers Jerry (Barbara) Plamann, Jon (Julie) Plamann, Michael (Janet) Plamann, brother-in-law Robert Griffiths, and sister-in-law Sharon Plamann; along with many nephews and nieces. He was preceded in death by his wife Nancy, his parents, sister Betty Griffiths, brother Emro Plamann, and brother-in-law John T. Wardijan, and sister-in-law Donna Szafir. Due to COVID-19 restrictions, a celebration of life and burial cremains at Central Wisconsin Veterans Memorial Cemetery will be held at a later date. The Holly Funeral Home of Waupaca is assisting the family with arrangements.

Kay W. Plamann, Wisconsin Veteran&#8217;s Home at King, passed away on November 20th, 2020 after a brief illness. He was born November 7th, 1935 in Cicero, Wisconsin. He was the son of the late Emro and Caroline (DeWall) Plamann. On July 20th,... View Obituary & Service Information

The family of Kay W. Plamann created this Life Tributes page to make it easy to share your memories.

Send flowers to the Plamann family.