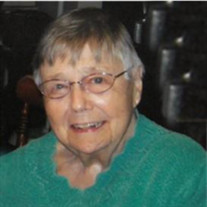 Lila Mae (Lee) Pohl, of Waupaca, passed away peacefully, on Monday, December 20th, 2021, at Bethany Home. She was born in Amherst, Wi., on March 14th,1929, to Elmer and Irene (Borgen) Lee. Lila grew up in Amherst and graduated high school there in 1947. She then went to Milwaukee to learn nursing, and graduated from Deaconess School of Nursing as a registered nurse. On March 24th,1951, she married Allen Pohl and they moved to Stevens Point. Later the next year they moved to Waupaca, where they would live the rest of their lives. Lila worked for Dr. Boudry and at the old hospital on Lake Street, then for many years after the new hospital was built, at Riverside Memorial Hospital, and finally at Bethany Home. Family was the center of Lila's life. Holidays, birthdays and "no reason" gatherings were always hosted by Lila and Al. No one needed to ask where the party was, only what time. She was very active in her children's lives, and later in her grandchildren's and great grandchildren's lives. Coffee, neighbors and often knitting, were a big part of her life when her kids were young. Later, she enjoyed snowmobiling, fire auxiliary and traveling. Lila and Al camped and fished in Canada, and traveled to Norway, Denmark, West Germany, Italy and France. After retiring they spent a number of Januarys on Padre Island, Texas, and occasionally drifted across the border to Mexico. Lila had a very strong Christian faith, serving her church, Trinity Lutheran, in many capacities, including Circle, Alter Guild, Prayer Chain and Couples Club. She and Allen spent weeks in many summers doing missionary work, tending to spiritual, emotional and health needs of the indigenous people around Lynn Lake, Manitoba, Canada. Lila was married to Allen for 70 years. He preceded her in death in August of this year. She was also preceded by her parents, Elmer and Irene Lee, brother Donald Lee, her in-laws Harold and Edna Pohl, and her sister-in-law Irma Lee. Lila is survived by her children, Mark (Hélène) Pohl of Ogdensburg, David ( Mary) Pohl of Waupaca and Douglas (Stephanie) Pohl of Waupaca, a brother, Gordon Lee of Scandinavia, a sister-in-law, Lila (Dale) Mathwich of Sun Prairie, nieces Linda (Chuck) Hadjinian, of Woodinville, Washington and Judy (Jeff Bender)Lee of Milwaukee, nephews Bruce (Mary Ann) Mathwich of Rockton, Ill., Scott (Sue) Mathwich of Columbus and Dean (Lu Ann) Mathwich of Marshall, grandson Samuel Pohl of Milwaukee, granddaughters Melissa Pohl of Portage, Sarah (Steve) Elliott of Appleton, Nora (Regina) Pohl of Ft. Collins, Co. and great grandchildren Lachlan Elliott of Appleton and Ruby Young and Corah Young of Portage. A Memorial Service for Lila will be held on Sunday, January 2nd, 2022, at 1:30 p.m. at Trinity Lutheran Church in Waupaca, with Rev. Erin Coutts officiating. Interment of cremains will be at Lakeside Memorial Park in Waupaca at a later date. Memorial visitation will be held on Sunday, January 2nd at 12:30 until the time of the service at Trinity Lutheran Church. Wearing of face coverings and physical distancing is encouraged while in the church. In lieu of flowers, memorials can be made to Lila's church or Mayo's for cancer research. Lila's family would like to express their appreciation for the nurses and staff at both the Pines, where Lila (and Allen) lived prior to their health problems, and in the rehab end of Bethany. They often witnessed your care and kindness. They also want to thank Trinity Lutheran and Holly's Funeral Home for accommodating them with a Sunday service. Traveling family members greatly appreciate their efforts. They want to recognize Heartland Hospice nurses and social workers for their skill and professionalism in keeping mom out of the pain she had been in for weeks before going into hospice. Thank you all.

Lila Mae (Lee) Pohl, of Waupaca, passed away peacefully, on Monday, December 20th, 2021, at Bethany Home. She was born in Amherst, Wi., on March 14th,1929, to Elmer and Irene (Borgen) Lee. Lila grew up in Amherst and graduated high school there... View Obituary & Service Information

The family of Lila M. Pohl created this Life Tributes page to make it easy to share your memories.

Send flowers to the Pohl family.