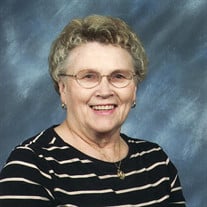 Wild Rose/Sun Prairie, WI - Lois J. Ruetten, age 84, passed away on January 4, 2020 in Wild Rose, WI. She was born March 9, 1935, in Briggsville, WI, the daughter of Chancey and Louise (Friede) Mylrea. Lois graduated from Reedsburg High School in 1953. Lois met her husband Bill shortly after, and they were united in marriage in 1957. They eventually settled in Sun Prairie, WI, where they raised their three sons, Alan, Michael, and Timothy. Lois spent her working career helping the elderly at nursing homes and the State of Wisconsin at Central Wisconsin Center. She retired in 1997 and continued her passion for helping people by volunteering at St. Mary’s Hospital, VA Hospital, American Legion, and The Colonial Club. Lois is survived by her children Alan (Caryn) Ruetten of Wild Rose, WI, Michael (Mary) Ruetten of Sun Prairie, WI, and Timothy (Nancy) Ruetten of Dexter, NY; 8 grandchildren and 3 great grandchildren; brothers Earl (Marion) Mylrea and Wayne (Sharon) Mylrea; sister Joyce Grams; and many other relatives and friends. She was preceded in death by her parents, her husband Bill, and brothers Walter and Richard, and many other relatives. Private services will be held at a later date. The Holly Funeral Home of Wild Rose is assisting the family with arrangements.

The family of Lois J. Ruetten created this Life Tributes page to make it easy to share your memories.

Send flowers to the Ruetten family.