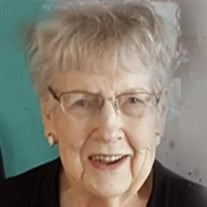 Lois E. Tomaras, age 94, of Waupaca, WI, passed away Wednesday, September 16, 2020, at her residence. She was born in Chicago, IL, on August 10, 1926, a daughter of the late Josiah and Alice (Lindskoog) Porrey. Lois spent her childhood in Chicago. Lois was employed at Standard Oil Company in Chicago, where she met and married her husband Angelo on October 5, 1946, in Chicago, Il. After the birth of their first son, they moved to Waupaca in 1950. The family continued to grow to include two more sons and a daughter. Lois married Angelo Tomaras on October 5, 1946, in Chicago, IL. He preceded her in death on December 23, 2005. One of Lois's first jobs was at Sears Roebuck Company in Chicago as a sales clerk. She later went to work at Standard Oil Company as a secretary. After moving to Waupaca, she stayed home to raise her family. Lois and Angelo enjoyed dancing when living in Chicago. In Waupaca, they joined a square dance group. Lois was a den mother for cub scouts and a helper for Brownies and Girl Scouts. She enjoyed playing the piano which she played by ear. She especially enjoyed playing the "Entertainer" for her grandchildren. Lois was very artistic and considered art school at one time but raising her family was more important to her. She enjoyed camping with her family. A special spot to camp for her was Franklin Lake in Eagle River, WI, where they spent their annual family vacation. Lois was a long time member of Trinity Lutheran Church. During that time, she was the head of Altar Guild, sang in the choir, was a charter member and leader of the Trinity Prayer Chain, and a member of several Bible study Circles. Lois's faith was an essential part of her life. During this challenging past year, she was happy that she could listen and watch weekly church services on her computer. Lois was a very proficient seamstress and made many of her children and grandchildren's clothing, quilts, and stuffed animals. She also was able to knit and made quilts. Lois was an avid reader and read hundreds of books, including later on books on her Kindle. She loved playing games with her family and friends, especially at holiday times. She loved dice games, including "Bunco and Chicken." She also loved Monopoly and had many versions of it. Once her children were grown, Lois went back to work part-time and later full time. At first, she worked at Holly Ambulance. When the ambulance service was sold to her son, Lois continued working on billing and was the office manager at the newly formed Waupaca Area Ambulance. She worked on computers when the first computers became popular. Even in her 90's, Lois was still able to search the internet and was an avid user of Facebook. She continued to work at the Ambulance Service for over 30 years and developed many close relationships. No matter how busy Lois was, she always took time to listen, understand, and never pass judgment. Some of the employees considered her their second Mother, which continued till the end. Lois was a wonderful Wife, Mother, Grandmother, Great Grandmother, Mother in Law, and friend. She was the most kind, compassionate person anyone would want to meet. Lois was a shining example of what it means to love others more than ourselves. She will be sadly missed by her family and all who knew her. Survivors include her Children: Dean (Pam Duchateau) Tomaras, Appleton, WI; Wendy (Geoff) Johnson, Waupaca, WI; Barry (Mary Jo) Tomaras, Waupaca, WI; Tracy (Joan) Tomaras, Waupaca, WI; Grandchildren: Jeremy (Erica) Tomaras, Deer Island, OR; Amber Tomaras, Madison, WI; Lindsay Tomaras, Norfolk, VA; Great Grandchild: Bridger Tomaras; Brothers: Doug (Mary) Porrey, Lafayette, CO; Kenneth (Jan) Porrey, Waupaca, WI; Very Special Cousin Evie Brown, Waupaca, WI; Very Special Friends Janet Johnson, Waupaca, WI; Lila Pohl, Waupaca, WI; Elaine Hansen, Waupaca, WI. She was preceded in death by her parents, husband - Angelo, and a grandson - Chad Buck. Funeral Services will be held at Trinity Lutheran Church in Waupaca at 11 AM on Monday, September 21, 2020, with Pastor Andy Behrendt officiating. The service will be live-streamed on Monday, the online link is [https://youtu.be/I2aaGd_cjFE]. Interment will be in the Central WI Veterans Memorial Cemetery, Town of Farmington, Waupaca Co., WI. Visitation will be held on Sunday, from 4 until 7 PM at the Holly Funeral Home in Waupaca. Due to the State Mandate, Holly Funeral Home would like to remind the public that no more than 75 people will be allowed in the funeral home (100 or less at the church) at one time with the wearing of masks and physical distancing observed. We sincerely encourage each person to make their own decision whether or not to attend a visitation and/or service based on the best interest of their health and the community.

Lois E. Tomaras, age 94, of Waupaca, WI, passed away Wednesday, September 16, 2020, at her residence. She was born in Chicago, IL, on August 10, 1926, a daughter of the late Josiah and Alice (Lindskoog) Porrey. Lois spent her childhood in... View Obituary & Service Information

The family of Lois E. Tomaras created this Life Tributes page to make it easy to share your memories.

Send flowers to the Tomaras family.