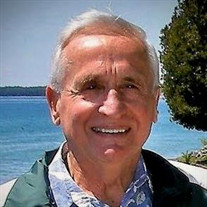 On May 12, 2020, L. “John” Krznarich passed away peacefully at the Wisconsin Veteran’s Home in King, WI. He was born November 4, 1929 in Park Falls, WI, the youngest of eight children of Frank and Anna Krznarich. John graduated from Park Falls High School and went on to serve two deployments in the US Army during the Korean War. In 1956 he married his friend’s youngest sister, Margaret “Marge” Rose Hickey. They lived in Milwaukee for a short time, then settled in Wisconsin Rapids where they raised their three daughters. John began his career as a masonry worker, then as a commercial contracting foreman, and later a realtor. As a skilled carpenter and architect, he went on to successfully establish his own general contracting business, Krznarich Homes, building numerous homes for Wisconsin Rapids area families. In fact, John designed and built his own family’s home of 50 years, without even having drawn up a plan! John was known for his extraordinary work ethic, passion for perfection, and deep desire to live every day to its fullest. He brightened the lives of all he met by offering warm greetings, a genuine smile, and sharing the latest joke or story from his past, sometimes more than once! He was devoted to learning all he could about the world by reading often. John avidly pursued outdoor adventures, continuously preparing for the next season’s deer hunt and customizing his boat for fishing trips to local and Canadian waters. He and Marge cherished their summer camping excursions along the Mississippi River together with their three daughters, and close family friends. As a young man John learned to water ski and completed jumps on a wooden ramp on the waters of Butternut Lake. He continued to water ski and snow ski throughout his life, well into his 80’s. At an early age, John taught himself to play the guitar, and had a great appreciation for classic Country Western music. He loved to golf, follow the Packers, and play with his grandchildren. John was a member of the Knights of Columbus and the Elks Club for many years, and treasured his time at the bowling alley with the Elk’s Bowlers as recently as last year. John is survived by his wife Marge, daughters Joan (Joseph) Horsfall of Fort Lauderdale, FL, Sherri (James) Rickman of Helena, MT, and Jenni (Nathan) Slinde of Fond du Lac, WI, grandchildren Benjamin (Ciarra) Rickman, Alyson Rickman, Alexandra Horsfall, Gavin Slinde, Andrew Slinde and his close nephew, Brian Krusko. He is also survived by his best fishing buddy Dick Ashenbrenner, long time friend Ed Maier, and his beloved dog Joey. John was preceded in death by all of his siblings. His family would like to express deep appreciation to the wonderful nurses and staff members on the second floor of Ainsworth Hall at the Wisconsin Veterans Home and Heartland Hospice for providing him with outstanding care and compassion the last 9 months of his life. A memorial service with full military honors will be held at a later date.

The family of Louis "John" Krznarich created this Life Tributes page to make it easy to share your memories.

Send flowers to the Krznarich family.