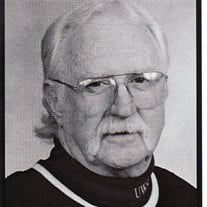 Lynn "Red" Blair, age 79, of Waupaca, WI passed away on Thursday, October 31, 2019 at ThedaCare Regional Medical Center in Neenah, WI. Red was born in Chandlerville, IL on November 23, 1939, the son of the late Ernest and Letitia (Lynn) Blair. He graduated from Beardstown High School in 1957 and from MacMurray College in 1961. He earned a bachelor's degree in physical education from MacMurray College (IL) and a master's degree in physical education from the University of Southern Mississippi. Red served as UW-Stevens Point's swimming & diving coach from 1965-1997 where he coached 477 first team and honorable mention All-Americans. He was selected the NAIA Coach of the Year in 1990 and NCAA Division III Coach of the Year in 1997. Red was chosen the conference Coach of the Year three times. He led the men's team to 14 top-10 national finishes and the women's team to three top-10 finishes. He coached 13 individual national champions and was the recipient of the College Swimming Coaches Association of America Master Coach Award and Distinguished Coach Award. He was president of the NAIA Coaches Association from 1981-1982. From 1973-1976, he was a member of the U.S. Olympic Committee for women's swimming representing the NAIA. In 1975, he traveled to Mexico to put on a swimming clinic on behalf of the U.S. Collegiate Sports Counsel. In 1979, Red served as an assistant swimming coach for the World University Student Games. He was inducted into both the NAIA Hall of Fame and the NAIA District 14 Hall of Fame in 1985, and UW-Stevens Point Hall of Fame in 2000. His 1989-90 men's squad that finished as the NAIA national runner-up was inducted into the UW-Stevens Point Hall of Fame in 1996. He was inducted into the MacMurray College Hall of Fame in 2006 as an athlete. Red was also inducted into the WIAC Hall of Fame in 2018. Red is survived by his wife of 44 years, Kay, 3 sons and a daughter in law, Aubrey, Brett (Ellen) and Scott, 4 grandchildren, Brandon (Amanda), Allie, Scotty & Dawson and his nephew, Ross (Andrea) Staffhorst. Besides his parents, he was also preceded in death by his sister, Linda and a granddaughter, Elena. Red's family, many friends and swimmers and divers were very important to him. He enjoyed golfing, fishing in Canada, visiting with his high school classmates, working as a courtesy driver, JR's coffee group, Corvettes and 57 Chevys, country music and cowboy boots. A Celebration of Red's Life and Social Gathering will be on Saturday, October 9 from 2 to 5 PM at the UW-Stevens Point Champions Hall (Bill Gelwicks Pool Area - 2050 4th Avenue) during UWSP Swimming & Diving Alumni Weekend Homecoming event. Individuals wishing to attend are please asked to RSVP on the UWSP website. Masks & social distancing will be required. For those unable to attend, a video including pictures/slideshow may be viewed later on the UWSP Swimming & Diving website. Holly Funeral Home of Waupaca, WI is assisting the family with arrangements.

The family of Lynn "Red" Blair created this Life Tributes page to make it easy to share your memories.

Send flowers to the Blair family.