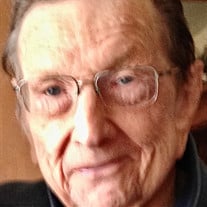 “I tried to go upstairs, and people I knew were gathered there, but they weren’t ready for me,” he said about a recent dream. Those preparations were evidently completed as Marion Witherspoon Conditt, 91, of Fort Worth, Texas, was welcomed by the heavenly hosts Oct. 27. He died at Bethany Home, a nursing facility in Waupaca, Wisconsin, where he felt loved, cared for and part of a family community in the final chapter of his life. Early Life Born Nov. 19, 1928, Marion was the oldest of three children of Helen A. Clough and Marion U. Conditt of Fort Worth. Nicknamed ‘Mernie,’ he joined the Army after high school and served with the occupation force in Japan. He went on to earn an undergraduate degree from Trinity University in San Antonio, a divinity degree from Princeton Seminary in New Jersey, which included a year at the New College of the University of Edinburgh (Scotland), and a Doctor of Theology from the University of Basel (Switzerland), where he studied under noted theologian Karl Barth. Ministry & Theology Rev. Dr. Conditt was an ordained minister of the Presbyterian Church (U.S.A.) and served as a pastor for almost 50 years. His ministerial career included leading churches of varying sizes in Texas, Oklahoma and Missouri. After retiring from full-time ministry and moving to Waupaca, he provided as-needed preaching and pastoral support at Wausaukee, Crivitz, Pembine, Marshfield, Weyauwega, Wild Rose and other area Presbyterian churches. He was also active in the Waupaca Area Ministerial Association and enjoyed being part of the summer preaching rotation at Camp Cleghorn in Waupaca. Marion was appreciated for his relevant, inclusive sermons, his ability to relate to all types of people, and how he lived out the Presbyterian charge to serve with “energy, intelligence, imagination and love.” Marion’s theology was centered around the belief that God offers salvation to all humanity, not because of what we say, do or believe, but because of God’s grace and redemptive love made known through the birth, life, death and resurrection of Jesus Christ. Bonnie During a student trip to Paris, under the Eiffel Tower, Marion met a beautiful Rotary scholar from Wisconsin who was also studying in Edinburgh. He offered her roasted chestnuts, which she graciously accepted before secretly discarding. A year later, the scene was repeated in Philadelphia, but this time the bag also contained an engagement ring. Marion and Bonnie Ellyn Warren were married in Sturgeon Bay, WI, and began a journey that included living in Switzerland and four U.S. states, multiple trips to Great Britain and mainland Europe, and annual vacations to her family’s cottages in Waupaca. They enjoyed more than 63 years of marriage. About As a husband, father, relative, minister and citizen, Marion was committed, loving and engaged, but he was rarely conventional. He dabbled in milk jug wine-making, caricature drawing and bread baking. With three young children to transport, he brought home an old English sports car instead of a family sedan. He often began sermons with a joke and used fun props in his children’s sermons. He was active in community theater and sometimes played the villain. He was an impulsive shopper, often bringing home grocery store treats like pickled herring or Braunschweiger, or ordering molds and ore to make lead soldiers. He could delight people with his dry humor, delivered with a straight face but accompanied by a sly smile. He saved money well but was generous with family and friends. Above all, Marion was dedicated to God, his wife and children, and the congregations he served throughout his career. Family Marion was preceded in death by Bonnie in 2017. He is survived by son Calvin, his wife Turi and their children Isabella and Oskar of Plymouth, MN; daughter Rev. Karla Conditt Daniels, her husband Brock and their children Knox and Grace of Augusta, GA; son Craig, his wife Karen and their daughters Andrea, Claire and Emma of Richardson, TX; sister Janet Cole of Kansas City, MO; brother Paul Conditt of Moscow, ID; and numerous nephews and nieces on both his and Bonnie’s sides of the family. Memorial Marion’s life will be commemorated at a date to be determined. A memorial page has been created at Never-Gone.com, and all are invited to share their memories, tributes and photos at this site. The family can be contacted at [email protected] In lieu of flowers, donations in Marion's name can be made to one of the organizations he supported: • CAP Services Volunteer Income Tax Assistance: CAPservices.org>VITA • Winnebago Presbytery – Mission & Education Fund: 181 E. North Water St., Ste. 207, Neenah, WI 54956 / 920-886-3598 Marion’s final resting place will be beside Bonnie at Lakeside Memorial Cemetery in Waupaca. Funeral services provided by Holly Funeral Home in Waupaca.

&#8220;I tried to go upstairs, and people I knew were gathered there, but they weren&#8217;t ready for me,&#8221; he said about a recent dream. Those preparations were evidently completed as Marion Witherspoon Conditt, 91, of Fort Worth, Texas,... View Obituary & Service Information

The family of Marion W. Conditt created this Life Tributes page to make it easy to share your memories.

“I tried to go upstairs, and people I knew were gathered there,...

Send flowers to the Conditt family.