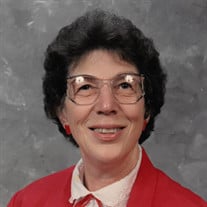 Marjory Anna Bowden, 89, passed away on Friday, May 14th, at Whispering Pines Assisted Living in Plover. She was born January 16, 1932 to Lloyd and Effie Lea in Plainfield, where she grew up and attended school, graduating from Tri-County Union Free High School in 1950. She married her sweetheart, Dwight Bowden, on Valentine's Day, February 14th, 1953, and they celebrated 68 wonderful years together, raising their family in Almond. Marjory was active in the Almond United Methodist Church, was a leader and chapter organizer for the Girl Scouts of America, and helped in the family business, Union Telephone Company, acting as the customer service representative for their subsidiary, Satellite Systems by Union Telephone, until her retirement. She was a longtime member of the Wisconsin State Telecommunications Association, and received the Badger chapter of the Independent Telephone Pioneers Association's Life Enrichment Award in 2001. She was known for hosting parties, her love of birds, especially cardinals, and spending time with her grandchildren. Other pastimes included traveling with Dwight in their RV, spending time at their camper at Vista Royalle in Bancroft, and visiting area casinos. She is survived by her husband Dwight; children Karen Stardy (Bob), Kathy Kehl (Steve), and Ron Bowden (Mikki); grandchildren Kristy Werzinske, Kenny Waterson, Jenny Kehl (Joel Verdittelli), Jake Bowden (Alysson), Jordan Bowden (Hillary), Samantha Fasula (Josiah) and great-grandchildren P.J. Werzinske and Gabe, Sophia, Solomon, and Sebastian Bowden. She was preceded in death by her parents, brother Walter Lea, and grandson Matthew Kehl. A funeral service will be held on Friday May 21, 2021 at 11 A.M. at the Almond United Methodist Church. Pastor Grace Cho will officiate, with burial to follow at the Almond Village Cemetery. A visitation will be held on Thursday May 20, 2021 from 4 P.M. until 7 P.M. at the Almond United Methodist Church and again on Friday at the church from 10 A.M. until the time of the service at 11 A.M. The Hardell-Holly Funeral Home of Almond is assisting the family with arrangements.

Marjory Anna Bowden, 89, passed away on Friday, May 14th, at Whispering Pines Assisted Living in Plover. She was born January 16, 1932 to Lloyd and Effie Lea in Plainfield, where she grew up and attended school, graduating from Tri-County Union... View Obituary & Service Information

The family of Marjory A. Bowden created this Life Tributes page to make it easy to share your memories.

Send flowers to the Bowden family.