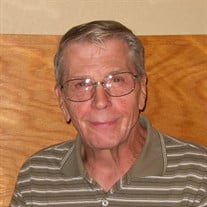 Martin “Todd” Van Gompel, age 81, Waupaca, Wisconsin, passed away at King Veterans Home with his family at his side on Wednesday, November, 27, 2019 after a courageous battle with Alzheimer’s. Todd was born in Little Chute, on September 19, 1938, son of the late Martin and Ardena (Verbeten) Van Gompel. Martin graduated from St. John’s school in Little Chute. Todd served his country in the US Army after high school until he was honorably discharged in 1963. He was united in marriage to Dace Knostenbergs on October 29, 1966. Together they shared 42 years of marriage and worked side by side in the drive-in restaurant they started in Waupaca, called ‘The Hut’. She preceded him in death on October 19, 2008. Todd enjoyed talking with customers at The Hut, giving them a hard time and making jokes. He worked many hours making and delivering ice. He enjoyed spending time with his family on Pine Lake, snowmobiling, waterskiing, and playing chess. He also enjoyed watching the Packers and Brewers. He is survived by his Daughters: Brenda (Steve) Jamroz; Holly (Sean) Colligan; Son: Marty (Heidi) Van Gompel; Grandchildren: Jonah & Anna Jamroz; Norah Van Gompel; Riley & Patrick Colligan; Brother: Paul (Kathy) Van Gompel; Sister: Sharen (Tom) Wolf; and sister-in-law Lorraine Van Gompel. He is also survived by other relatives and friends. He is preceded in death by his parents; Martin & Ardena, brother; Robert Van Gompel, sisters; Joannie Johnson, Kathleen Van Gompel, Karen Van Gompel and brother-in-law; Richard Johnson. The family would like to thank the staff at King Veterans Home for their love, compassion and care of our father as well as Holly Funeral Home during this difficult time. A memorial service will be held on Friday December 13, 2019 at 2:00 P.M. at the Holly Funeral Home in Waupaca followed by Military Honors. A memorial gathering will be held on Friday from 12:00 P.M. – 2:00 P.M. In lieu of flowers, please make a donation to the Alzheimer’s Association in Martin’s name.

Martin &#8220;Todd&#8221; Van Gompel, age 81, Waupaca, Wisconsin, passed away at King Veterans Home with his family at his side on Wednesday, November, 27, 2019 after a courageous battle with Alzheimer&#8217;s. Todd was born in Little Chute,... View Obituary & Service Information

The family of Martin "Todd" Van Gompel created this Life Tributes page to make it easy to share your memories.