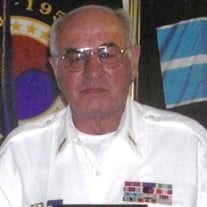 Marvin “Marv” Waldschmidt, 90, of Waupaca, formerly of Fond du Lac passed away on Wednesday, August 28, 2019 at his home. He was born in the Town of Forest in Fond du Lac County on August 6, 1929, the son of Harry and Genevieve (VanderMolen) Waldschmidt. He was united in marriage to Mary Bohlman, on April 18, 1959. They enjoyed over 60 years of marriage. Marv served his country in the regular Army in Japan and Korea from 1948 to 1952. He then joined the Army Reserves in 1953 until 1989, retiring with the rank of Command Sergeant Major after 36 years of service. Marvin received the Army Commendation Medal, Army Achievement Medal, Bronze Star Medal, two Purple Hearts Medal and several other decorations. In civilian life, Marv worked for the United States Postal Service for 34 years and part time for the Taycheedah Correctional Institution for 17 years. Marv enjoyed going to Laughlin, Nevada with his wife, Mary, and traveling to the Rocky Mountains, Colorado River and their many bus trips to the Island Casino in Michigan. He was also an active member of the Fond du Lac and Waupaca Lions Club, the VFW Post 1037 in Waupaca, Trinity Lutheran Church in Waupaca and Hope Lutheran Church in Fond du Lac, where he served as an usher. Marv’s pride and joy were spending time with his only grandson, Matthew. They would go out to fish on Friday nights, play the stock market together, plant grass and work in the yard together. He was very proud of his grandson who graduated from the University of Wisconsin-Milwaukee. Marvin is survived by the love of his life, Mary Waldschmidt of Waupaca; daughter, Patti (Dr. David) Furrer of Marlborough, Connecticut, son, Michael (Cindy) Waldschmidt of Waupaca, grandson, Matthew Marvin Waldschmidt of Lewisville, Texas and a sister, Jeanette Uravich of Milwaukee. He was preceded in death by his parents, brother, Harvey Waldschmidt, brothers-in-law, Bernard and James Bohlman, Elmer Zimdahl and Ralph Bautzmann, sister-in-law, Betty Bohlman and a nephew, Michael Zimdahl. Funeral services will be Sunday, September 1, 2019 at 2:00 p.m. at Holly Funeral Home in Waupaca. Rev. Andy Behrendt from Trinity Lutheran Church of Waupaca will be officiating. Loved ones and friends will be received by the family from Noon on Sunday until the time of services at Holly Funeral Home. Burial will be on Tuesday, September 3, 2019 at 1:00 p.m. at Central Wisconsin Veteran Memorial Cemetery in King, WI with full military honors. Holly Funeral Home of Waupaca will be assisting the family with arrangements.

The family of Marvin Walter Waldschmidt created this Life Tributes page to make it easy to share your memories.

Send flowers to the Waldschmidt family.