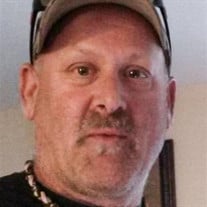 Michael “Mike” Farrell, 59, died unexpectedly, Friday, August 23, 2019 at his residence. He was born on January 2, 1960 in Milwaukee. Son of Susan (Turck) Farrell and the late Raymond Farrell. Mike graduated from Waupaca High School in the class of 1979. Following his graduation, he served with the U.S. Army and later worked in the MWR dept at various military installations, most recently at JBSA Lackland, San Antonio, Texas. Mike had a passion for running, swimming, bicycling and had a love of gardening. As a point of pride, he would happily give guests a tour of his edible garden and other plants. Mike is survived by his training partner and loving wife, Davina (Walker) Farrell of San Antonio, Texas; his former wife, Carrie Hackett and his daughter, Jessica (Tyler Henrichs) Farrell; mother, Susan Farrell of Safety Harbor, Florida; mother-in-law, Darlene Walker of South Euclid, OH; brother, James (Cindy) Farrell of Marshfield, WI; three sisters, Mary Farrell-Roloff, Sharon (Ken) Christensen and Kathleen (Sean) Katuin all of Waupaca, WI and numerous cousins, nieces, nephews and friends. A memorial mass will be held Saturday, August 31, 2019 at 11:00 a.m. at St. Mary Magdalene Catholic Church in Waupaca. Fr. Zavier Santiago will preside with Fr. Peter Manickam co-celebrating. Visitation will be Saturday from 10:00 a.m. until the time of the mass at the church. A.J. Holly Funeral Home of Waupaca is assisting the family with arrangements.

The family of Michael Thomas Farrell created this Life Tributes page to make it easy to share your memories.

Send flowers to the Farrell family.