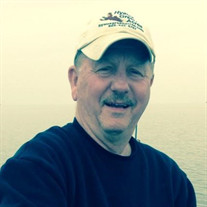 Michael J. Tenant age 72 of Waupaca passed away on Tuesday, October 22, 2019. He was born on January 8, 1947 in Oshkosh, WI, the son of the late James Henry Tenant and Inez Nina Mitchell-Tenant. He graduated from Oshkosh High School in 1965. Mike worked various jobs and then became an office technician for Oshkosh Office Supply, fixing offset printing equipment, copy machines, and other printing equipment. He worked for AB Dick of Appleton, WI, AB Dick in Santa Barbara, CA and AB Dick in Green Bay, WI. He had various positions as service technician, service manager and a sales representative. In 1990 Mike started a printing business in the basement of his Waupaca, WI home. The business later moved to Main St, Waupaca. Mike sold the business in December 2017. Mike married Karen Kleist in 1967 in Oshkosh, WI. They were divorced in 1977 having joint custody of their son, Sean. Mike married Mary L. Jaynes on November 25, 1978 in Plover. They lived in Lompoc, CA until Mary's discharge from the United States Air Force. Mike and Mary moved back to Oshkosh for 9 years, before moving to Waupaca. Mike was a long time Lions member both in Butte Mort Lions Club and Waupaca Lions Club. He served in various capacities in the club including president. He was a recipient of Melvin Jones award. Mike was also a member of Waupaca Nomads. He participated in Ducks Unlimited for many years. He sponsored trap teams and shot Trap at the Waupaca Conservation Club in the spring and curled in the winter. He played league golf and then only occasionally at golf fund raisers or benefits. He was an avid hunter, both gun and bow. He hunted deer, pheasants, turkey and other fowl. His greatest passion was walleye and perch fishing. He fished in various places including Canada and fished on Lake Winnebago all his life. He had been a Cub Scout leader when son Brian was young and also coached the Cub Scout baseball team. Mike was preceded in death by his parents. He is survived by his wife Mary Jaynes-Tenant Waupaca, his sons, Sean Tenant (Cyndee) Petaluma, CA & Brian Tenant (Kelley) Milwaukee; his daughter, Katie Tenant (Jeremy O'Brien) Amherst; his grandchildren: AJ O'Brien, Zoey O'Brien, Easton O'Brien, Amize Tenant and James Tenant; and his brother, Kelly Tenant, Oshkosh. Memorial Services will be on Wednesday, October 30 at 7 PM at the Holly Funeral Home in Waupaca. Mike will be buried in the Central WI Veterans Cemetery at King. A Memorial visitation will be on Wednesday afternoon from 4 PM until the time of services at the funeral home. Memorials may be sent to the Waupaca Lion Club (Lions International) or the Waupaca Nomads. Holly Funeral Home in Waupaca is assisting the family with arrangements.

Michael J. Tenant age 72 of Waupaca passed away on Tuesday, October 22, 2019. He was born on January 8, 1947 in Oshkosh, WI, the son of the late James Henry Tenant and Inez Nina Mitchell-Tenant. He graduated from Oshkosh High School in 1965.... View Obituary & Service Information

The family of Michael J. Tenant created this Life Tributes page to make it easy to share your memories.

Send flowers to the Tenant family.