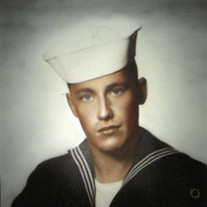 Michael E. Rosio slipped into heaven Sunday, December 15, 2019 from complications due to internal bleeding at ThedaCare Regional Medical Center in Appleton, WI. He was born April 2, 1945 in Antigo, WI, son of the late Gene Rosio and Rachel (Arrowood) Bernier. To say Mike was an eccentric kind of guy is an understatement. He had a quirky sense of humor; his photographic memory could evoke recalling an article he had read years ago verbatim. Mike would regale us with things happening in the universe, animal life, events, etc. That being said, he had a hard time living everyday life. After graduating high school, he signed up with the Navy serving two terms in Viet Nam that gave him the stability to live a normal life because of the structure. After his stint in the Navy, Mike would be able to use his skills learned as an electrician and was employed by Marathon Electric, Wausau, WI. After retiring he would be seen walking all over Wausau. On one of our planned reunions to WI we siblings approached the idea of Mike living at the veteran’s home. He was open to the possibility and many doors were opened for the chance to be accepted by King Veterans complex. The bulk of his acceptance fell on sister, Darlene and he flourished once he was established. Mike was proud to serve as an active Honor Guard and also volunteered in the Library and set up the Chapel for worship every week. Mike is survived by sisters, Janet Schoblaska of Arizona and Darlene King of Georgia; brother, Donald (Gertrude) Rosio of Washington. Besides his parents, he was preceded in death by a sister, Gloria Sweeney. A funeral service will be held Wednesday, January 8th, 2020 at 10:00 a.m. at King Veterans MacArthur Hall Chapel at 422 Bell Ave., King, WI with Chaplain Rich Engle officiating. Friends may call from 9:00 a.m. Wednesday until the time of services at King. Burial will be in Central WI Veterans Memorial Park in King, WI with full military honors. A.J. Holly & Sons of Waupaca assisted the family with arrangements. The family would like to take this opportunity to thank the many caregivers who had a part in making Michael's stay with them so comforting.

The family of Michael Edward Rosio created this Life Tributes page to make it easy to share your memories.

Send flowers to the Rosio family.