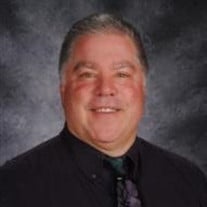 Michael F. Toelle, age 54, of Amherst Jct., WI, passed away after a courageous battle with AML (Acute Myeloid Leukemia) on Tuesday, July 30, 2019 at UW-Hospital in Madison, WI. He was born August 24, 1964 in Marshfield, WI; son of Dale and Rosemary (Fisher) Toelle. Mike graduated from Neillsville High School in 1982 and continued his education by attending UW-Stout, graduating in 1988 with a bachelor’s degree in marketing education/business administration. He continued on even further with his education where he received his Master of Arts in Education from Marian College in 1996, and then finished credits to obtain his Superintendent Licensure in 2016 at Winona State University. In November 1995, Mike met his future wife, Kris Gordon. They were engaged that next May and were married on July 19, 1996 at Nelsonville Lutheran Church. They have been inseparable ever since. Mike taught as a business/computer instructor for the Iola-Scandinavia School District from 1992-1997. He then accepted the role as assistant junior/senior high school principal for the Auburndale School District serving only a year before accepting a position with the Tomorrow River School District as their junior/senior high school principal in 1998. With his time spent at the Tomorrow River School District, he was the high school principal for two years, middle school principal for ten years, elementary school principal for seven years, and the charter school principal for four years. Mike also served as curriculum coordinator, special education designee, and ELL coordinator. The next step in Mike’s administrative career was in 2017 when he accepted the position of District Administrator for the Tomorrow River School District. His famous quote depicting his leadership style, “Every Teacher-Every Day”. Along with his academic achievements, Mike also served as a football and track coach in Iola, and was a football coach on all levels in Amherst, coaching many athletes through the years. He enjoyed being able to coach both of his sons through their school years and being a part of school athletics. Mike was excited to be involved with the Falcon Pride Project and wanted to see a brighter tomorrow for all of the Tomorrow River Community. Mike and his family enjoyed taking their spring break vacations to Panama City Beach, FL. He also enjoyed his duck hunting trips to North Dakota with his brother, Mark; son, Marcus; nephew, Marshal; lifelong friend, Dave; special friend, Glenn; and several other close friends. Mike was an avid deer hunter and walleye fisherman and enjoyed spending time outdoors. Many weekends were spent up north at their cottage on Lake Alice in Tomahawk entertaining family and friends. He volunteered his time as a board member for the Lake Alice Association. In his last hours, Mike shared many wishes, almost all of them to make things better for Kris and his family. He gave lots of instructions to finish plans they had projected or ones they had in motion. His strength through the night was unprecedented according to the nurses and he worked hard at his breathing to be with us in mind and spirit until the end. Mike was able to say goodbye to everyone and was ready to go as he knew there was nothing medically they could do now that the AML was in his lungs. He wrote down most of his wishes in his notebook after he had difficulty communicating in the end, and one of the last statements he posted was that he had three best friends, Kris, Dave and Mark. Mike is survived by his wife, Kris Toelle of Amherst Jct.; two sons, Adam (Megan) Lee of Plover and Marcus Toelle of Amherst Jct.; grandson, Oliver Lee of Plover; mother, Rosemary (Fred) Toelle-Otters of Stevens Point; three siblings, Sheryl (John) Castillo of Madison, Brian (Susan) Toelle of Stevens Point, and his twin brother, Mark (Christy) Toelle of New Lisbon; parents-in-law, Gale and Ruth Gordon of Nelsonville; two brothers-in-law, Jay (Deb) Gordon of Nelsonville and Kyle (Kim Peplinski) Gordon of Nelsonville; nieces and nephews, Kyle (Mae) Judd, Scott (Lisa) Judd, & Abbie Vance; Ezra, Caleb, Rachael, & Zach Toelle; Mason, Marshal (Marissa), & Isabel Toelle; Alicia (Nick) Wyss, Jordan McGuire, & Morgan (Trever) Reichhoff; Taylor & Rachel Gordon; and Austin (Amber), Chase, & Afton Gordon; great-nieces and great-nephews, Bear Judd, Lucie Wyss, Lilley Wyss, and Brantley Wyss; and special friends, Glenn (who was like a father to Mike) and Linda Mott of Tomahawk and Dave and Cheryl Larsen of Neillsville. He was preceded in death by his father, Dale Toelle; his daughter, Kayla Joy Toelle; and a sister, Rhonda Toelle. A Funeral Service will be on Tuesday, August 6, 2019 at 1:30 PM at the Amherst High School Gymnasium in Amherst, WI. Reverend Dwight Anderson will officiate. A visitation will be held on Monday afternoon, August 5th, from 3:00 – 7:00 PM at the Amherst High School Cafeteria (door A3) and again on Tuesday from 11:30 AM – 1:30 PM in the high school gymnasium. A private family burial will take place after the service at Nelsonville Lutheran Cemetery in the Town of New Hope, WI. In lieu of flowers, a memorial has been established in the name of Michael F. Toelle. The Jungers-Holly Funeral Home of Amherst is assisting the family with arrangements.

Michael F. Toelle, age 54, of Amherst Jct., WI, passed away after a courageous battle with AML (Acute Myeloid Leukemia) on Tuesday, July 30, 2019 at UW-Hospital in Madison, WI. He was born August 24, 1964 in Marshfield, WI; son of Dale and... View Obituary & Service Information

The family of Michael F. Toelle created this Life Tributes page to make it easy to share your memories.

Send flowers to the Toelle family.