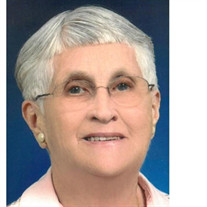 Mildred Irene (Sherman) Rasmussen, age 95, formerly of Almond, passed away on Friday, November 13, 2020, under the care of staff and Hospice at the Legacy in Waupaca. Mildred “Millie” was born on May 11, 1925 in Buena Vista, the daughter of Esther (Harroun) and Burton Sherman. She attended and graduated from the Keene School and attended PJ Jacobs High School in Stevens Point. On February 5, 1944, Mildred was united in marriage to Arnold Rasmussen and they took over the Rasmussen family farm where they raised their two girls and spent their married life together. Together they worked on the farm, where they grew cash crops and raised pigs and chickens. Later, she worked at King Veterans Home but retired to care for her husband. Together, they enjoyed traveling, playing cards and games with family, friends, and neighbors, and preparing family dinners. Arnold preceded Mildred in death on June 29, 1985. Mildred continued to live on and maintain the farm as well as work at Jim Burns Farm in Almond. She was an officer and active member of the Eastern Star, Rebecca’s, and American Legion Auxiliary. She furnished food and baked goods for community dinners and always volunteered to wash dishes. Family was always very important to Mildred. She enjoyed her seven grandchildren and also her eleven great-grandchildren. She drove to watch as many of their activities as possible and would even join in kickball and soft ball games at family gatherings. For holidays and birthdays, she made and sent cards to all grandchildren and great-grandchildren with cash enclosed. Angel food cakes were always her contribution to the birthday celebrations. Mildred continued to call the farm home until she broke her second hip in March of 2015. Then, she moved to the Park Vista Assisted Living in Waupaca and later to the Legacy. Mildred is survived by her two daughters, Helen (Arnie) Heise of New London and Bonnie (Larry) Lindsay of Mondovi; seven grandchildren, Shari (Scott) VanOrnum of Jackson, Amy (Mike) Schraufnagel of Green Bay, Dan (Jenny) Heise of New London, Don (Jenny) Heise of Weyauwega, Tammy (Mark) Denk of Mondovi, Jim (Tammy) Lindsay of Boyd, John (Tasha) Lindsay of Fountain Hills, Arizona; and eleven great-grandchildren, Lauren VanOrnum of Jackson, Parker and Kylie Heise of New London, Bailey Heise and Aida Zeinert of Weyauwega, Ann, Brad and Casey Denk of Mondovi, Taylor and Levi Lindsay of Boyd, and Jackson Lindsay of Fountain Hills, Arizona; one brother, Leon (Dalyn) Sherman of Canyon Lake, California. Mildred was preceded in death by her husband, Arnold Rasmussen; her sister, Harriet Smith of Bozeman, Montana and her brother, Lyle Sherman of Bozeman, Montana; Due to Covid-19 restrictions, a private memorial service will be held for immediate family with burial following at the First Belmont Cemetery in Almond, Wisconsin. (Blaine) at a later date. The family would like to extend a special Thank You to Park Vista, the Legacy and entire staff, Dr. Wenberg and Hospice for the compassionate care while Mom was in their care, especially during this Covid-19 pandemic. The Holly Funeral in Waupaca, WI has been entrusted with the final arrangements. A live-stream memorial service for Mildred can be viewed on Saturday, December 5, 2020 at 11:30 a.m. at https://youtu.be/05oRKo39u8

The family of Mildred Irene Rasmussen created this Life Tributes page to make it easy to share your memories.

Send flowers to the Rasmussen family.