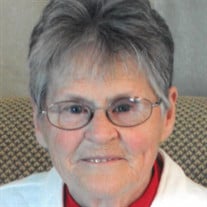 Myrna Jane Weaver, age 84, passed away peacefully on Sunday, October 17, 2021 at Bethany Home in Waupaca, WI after a bravely fought 14-year war with Alzheimer’s disease. She was born to Barney and Jewell Warren on a snowy January night in 1937 near the small Missouri town of Falcon in Laclede County. When she was 4 years old, she moved with her family to rural Iowa. Her childhood in Iowa’s country lanes and farm fields fostered a real love of nature in her that she never lost. Myrna graduated from Carson High School in 1953 and got a job as bank teller in Oakland Savings Bank. Then one day her older brother, Rex, asked Myrna if she’d ever like to go out with Norman Weaver, a friend of his. And Myrna said she wasn’t really sure she did, “cause those boys were kind of wild”. But she trusted Rex. Norman was in the U.S. Navy at the time and they saw each other when he was home on leave. During one of those leaves, they decided to get married and they got dressed up and went to the Justice of the Peace in Manawa, Iowa, grabbed two witnesses off the street and were married on May 14, 1955. Their happy marriage produced two daughters, Kristine and Justine, and lasted until Norm died 53 years later. Norman was the love of her life, and Myrna was devoted to him and her family. Myrna worked in banks over the years and also worked as a secretary in the Carson-Macedonia school system when her daughters were young. In 1975, Myrna and Norm bought a farm in Siam, Iowa and raised hogs and calves and farmed for several years. Myrna loved the country living: peace and quiet, the animals, sunrises, growing crops, birdsong, creek and pond. They later returned to Oakland, Iowa and Myrna retired from Oakland State Bank in May of 1997. After retirement, they moved to Tyrone, Oklahoma to be near their only granddaughter, Lindsay. Myrna loved music, especially Country Music. Her young daughters would often wake in the morning and locate their mother, maybe out in the garden but never far away, by the sound of her voice, happy in song. She had a beautiful singing voice. In the early 1950’s, Myrna skipped school with some friends and went to Shenandoah, Iowa to KMA Radio Station to watch the live performers there. This adventure included an invitation for her to sing on live radio with the Everly Brothers, then in their early days on the Everly Family Show. Myrna was always busy, her hobbies included gardening, canning, making jelly, crocheting, and garage sale shopping. She loved being outdoors. Her garden was huge and she had a great curiosity and interest in nature. (She adventurously poured a little water down every hole she came across just to see what would come out of it-a spider? A snake? She wasn’t squeamish.) Myrna Weaver was a happy person with a sweet nature, a sense of fun, and an ever-present warm smile. In the words of one niece, “a smile that lit up the room”. Words used most often in describing her are sweet, kind, wonderful, gentle, loving, and friendly. But I would add to this list “courageous”. Author Wilferd A. Peterson wrote: “Happiness does not depend upon what happens outside of you but on what happens inside of you; it is measured by the spirit in which you meet the problems of life”. Myrna encountered many problems, especially in battling Alzheimer’s disease these past 14 years. She courageously met all these challenges and kept her ready smile to the end. She was loved, admired, and will be missed very much. Myrna is survived by her daughters, Kristine (Curt) Dhein and Justine (Barry) Mikucki; granddaughter, Lindsay (Ryan) Sherrill; great-grandsons, Camden and Carter Sherrill; and her sisters, Delores (William) Lewis and Judy Cline. Beside her parents, Jewell and Barney Warren, she is preceded in death by her husband, Norman Weaver; brothers, Rex and Jesse Warren. A memorial service will be Saturday, May 14, 2022 at 11:00 am at Loess Hills Funeral and Cremation Center, 420 S. Oak St., Carson, IA. Burial of Cremains will be in Macedonia Cemetery in town of Macedonia, IA. Friends may call on Saturday from 10:00 a.m. until the time of services at the funeral home.

Myrna Jane Weaver, age 84, passed away peacefully on Sunday, October 17, 2021 at Bethany Home in Waupaca, WI after a bravely fought 14-year war with Alzheimer&#8217;s disease. She was born to Barney and Jewell Warren on a snowy January night... View Obituary & Service Information

The family of Myrna J. Weaver created this Life Tributes page to make it easy to share your memories.