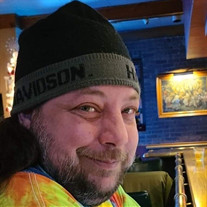 Norman Lee Pomerenke, 46, of Waupaca passed away unexpectely in his home on October 20, 2021. He was born in Waupaca, WI on September 23, 1975 to Linda (Pomerenke) Mundt. Norman graduated from Weyauwega- Fremont High School. He never married and was a carefree spirit who wanted to enjoy all life had to offer. He was a cook at Simpson’s Restaurant for over 20 years. Recently he made pizzas at Weasel’s on Monday nights. If you saw a man walking down main street in tie dye, chances are it was Norm. He always wore tie dyed shirts (the unoffical dress in Simpson’s kitchen) and received a new one every birthday from his mother. Norm was very social and could be found at any of the bars around Main street drinking a PBR, playing pool or doing the shake of the day. Norman enjoyed tying flys for fishing in the river behind his house. He played the drums, hunted and rode motorcycle. He also enjoyed mushroom hunting and taking pictures at sunset. He is survied by his daughter, Talia Golke, of Waupaca and son, Tanner Krusa. His mother, Linda (Pomerenke) Mundt; step- father, Larry Mundt; Siblings Jeremy (Tricia) Pomerenke of Ogdensburg, Andrew Mundt of Weyauwega and Rhonda (David) Ortner of Weyauwega; Step-brothers, Jason (Laurie) Mundt of Waupaca and Bill (Amanda) Mundt of Ellabell, GA; Grandchildren Sylas and Maevys Forseth of Waupaca; Aunts and uncles, Bill (Pam) Pomerenke of Scandinavia, Lorie (John Witzling) Manteufel of Waupaca, Wayne (Tammy) Pomerenke of Scandinvia, Kelly (Bob) Hansen of Waupaca and Lisa (Greg) Schulke of Waupaca; Nieces and nephews, Lillian Mundt; Trenton, Joey, Evelyn and Lucas Ortner; Evan Mundt; Morgan and Meghan Vaughan and Ava Szeker; Great Aunts and uncles, Laverne Pomerenke, Mildred Uhl, Rita Lamb, Kathy (Lenny) Goettl, Patrick (Peggy) Murphy. He is proceeded in death by grandparents, Orville and Rachael Pomerenke, Billie and Ray Parker and numerous great aunts and great uncles. There will be a Celebration of Life held at Simpson’s Restaurant on October 28, 2021 from 1-4pm. The family requests that all those in attendance dress in tie dye in honor of Norman. In lieu of flowers donation buckets have been placed at The Waupaca Pub, Weasel’s and Simpson’s Restaurant. The Holly Funeral Home of Waupaca is assisting the family with arrangements. “I love you, dad” - Talia

Norman Lee Pomerenke, 46, of Waupaca passed away unexpectely in his home on October 20, 2021. He was born in Waupaca, WI on September 23, 1975 to Linda (Pomerenke) Mundt. Norman graduated from Weyauwega- Fremont High School. He never married... View Obituary & Service Information

The family of Norman L. Pomerenke created this Life Tributes page to make it easy to share your memories.

Send flowers to the Pomerenke family.