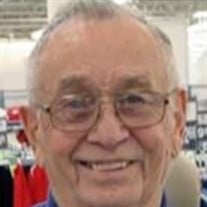 Norman George Yonke, age 81, was called to Heaven to be with God on April 19, 2020. Norman was born March 9, 1939, in Merrill, WI, the son of late Arthur and Minnie (Adams) Yonke. He grew up in Almond and graduated from Almond High School in 1957. On October 29, 1960, Norman married the love of his life, Verna Dernbach at Guardian Angels Catholic Church in Almond. They raised their three beloved children in Almond. Norman had numerous passions in life, including: family, the outdoors, traveling, doing projects around the house, and spending time with Verna. While his accomplishments were many, he was by far most proud of his grandchildren. He was their biggest fan, so proud to be part of every milestone, and never missed an opportunity to support or be around them. He was blessed with four great-grandchildren and his face would light up whenever their names were mentioned or they were around. Norman started working for the Pagel family on their farm in 1954. He then became a heavy equipment operator for Pagel Construction until his retirement in 2002. He was a proud member of Operating Engineer Local 139 and attended the national Caterpillar convention in Las Vegas. His love and pride for his job was evident when you were with Norman. He often pointed out the Caterpillar equipment along the road and joked about how straight a road was, what a great pond that was, or how smooth an embankment was as he reminisced about the job he was so passionate about. The Pagel Construction Crew truly was his second family. He made his mark. Norman was very proud of his community. He was a volunteer fireman, active in St. John’s Lutheran Church, and a member of the Almond-Bancroft Booster Club, and Rod and Gun Club. For him, anyone who wore Eagle green was “family.” In these recent years his “family” extended to anyone who wore Thunderbird orange in Iola-Scandinavia, where he cheered on his youngest grandchildren. Throughout the years you could find Norman supporting Randy as he was coaching A-B girls’ basketball and softball, working side by side with Jeff on the farm, attending all of Stacey’s UW-SP Pointer basketball games, on casino trips with Verna, cheering on the Badgers/Packers/Brewers/Bucks, collecting flywheel engines, participating in bowling leagues, snowmobiling, hosting pre-game meals for his grandchildren and their friends, or on a ball field where he was known as Stormin’ Norman. Norman was known to many and could light up a room with his presence and contagious smile. He was a jokester by nature, loved interacting with people and always took the time to visit. He never missed a coffee clutch or making memories with the Shack Pack. He was never without a hug, a kiss, or story. He was a loyal friend to many and had an infectious spirit. Norman made the world a better place simply by being in it. He will be forever missed. When it was time to leave an event or outing, Norman always reminded people “You don’t say goodbye, you say I’ll see you later.” Norman is survived by his wife Verna; his children: Randall (Darlene) of Almond, Jeffrey (Debbie) of Almond, Stacey (Mark) Wester of Iola; his grandchildren: Carissa (Adam) Pezewski, Danielle (Leo) Chapa, Brooke (Keith) Lockhart, Ethan (Fiancé Cassi McQuillan) and Garett Yonke, Payton and Brock Wester; his great-grandchildren: Sophia, Arabella, Daxx, and Pyper; brother-in-law Charles Jerry (Lynne) Dernbach; sister-in-law Linda (late Robert) Wierzba; half-sister Sue (Ed) Miller, and numerous nieces, nephews and friends. Norman is preceded in death by his loving mother Minnie and brothers Bernard (Nancy), Leland (Wanda), Harland (Linda), and Marvin (Carol) Yonke, all of whom he missed dearly. The family would like to express sincere gratitude to Pastor Brian Roehrborn from St. John’s Lutheran Church of Almond and the staff at The Lodge at Whispering Pines, Wausau Aspirus Palliative Care Unit, Heartland Hospice, and Maple Ridge Memory Care. Funeral services will be Saturday, May 30, 2020 at 11:30 a.m. at St. John Lutheran Church in Almond with Rev. Brian S. Roehrborn officiation. Visitation will be on Saturday morning from 9:00 a.m. until the time of service at the church. Burial will be in the Almond Village Cemetery. Hardell-Holly Funeral Home assisted family with arrangements.

Norman George Yonke, age 81, was called to Heaven to be with God on April 19, 2020. Norman was born March 9, 1939, in Merrill, WI, the son of late Arthur and Minnie (Adams) Yonke. He grew up in Almond and graduated from Almond High School in... View Obituary & Service Information

The family of Norman George Yonke created this Life Tributes page to make it easy to share your memories.

Norman George Yonke, age 81, was called to Heaven to be with...

Send flowers to the Yonke family.