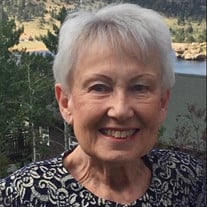 Patricia Ann Wolfe, age 80, of Waupaca, WI passed away on Monday, August 3, 2020 after a courageous battle with cancer. She was born on July 29,1940 in New London, WI; the daughter of the late Clarence and Viola (Lieg) Laux. Patty lost her mother at the age of 13. Her father then married Helen (Rohan), who was a blessing to Patty. She graduated from New London High School then attended secretarial school at Fox Valley Technical College and worked at Kimberly Clark. In 1958, she met Douglas Wolfe, whom she married on Oct. 1, 1960 at Most Precious Blood Catholic Church; they were married 58 years until his death Jan. 29, 2019. They lived in New London until 1972 when they moved to Waupaca. Pat spent her time raising their four children then later worked at the Wisconsin Veterans Home for 20 years. Pat was a member of St. Mary Magdalene Catholic Church. In her earlier years she belonged to the Waupaca Curling and Country Clubs. She volunteered at the Food Pantry and for many years was a faithful blood donor. Pat was social; she treasured her time with family and friends. She attended Badger games with the New London group, played in multiple bridge clubs - including one special group for 50 years, belonged to Third Thursday Bookworms, coffeed at Hardee’s, met high school classmates and relatives for lunch regularly, took a girls’ trip to Door County each summer and a couples’ trip with dear friends each fall. It was hard to keep Pat down even when battling cancer. She cherished recent trips to the Dominican Republic, Texas, Colorado and Arizona with family. She and Doug had a particular fondness for yearly family gatherings at their son, Steve’s, time spent in Florida with her sisters and brother-in-law, and any time she was able to be with her children and grandchildren. Pat faced trials in her life, as do many, yet was always “fine”. She lived her life by faith maintaining humility, composure and strength to the end. Patricia is survived by her children: Steven Wolfe of Marinette, Sharyl (Michael) Friedel, David (Farrah) Wolfe, and Linda (Todd) Anderson all of Waupaca; four grandchildren: Alyse (Neil) Forcier and their son, Taiylor, of Fort Collins, CO, Michelle (Jacob) Shervey, Julia Wolfe, and Gage Anderson all of Waupaca; sisters: Bette Gorges of New London, Ann (Bob) Braaten of Greenville, Teresa (Carl) Nelson of Mackinaw, IL, Paula (Patti Onweller) Laux of Dallas, TX and Mary (Duwayne) Verch of Ripon; brothers: Peter (Jane) Laux of Plover, Mike (Vicki) Laux of Oshkosh, and Joe Laux of Onalaska. Patricia was preceded in death by her husband, parents, brother, Jim Laux, and brother-in-law, Leland Gorges. She is also survived by and has been preceded in death by other near relatives and dear friends. A Private Mass of Christian Burial will be held Thursday, August 6th at St. Mary Magdalene Catholic Church. A link to the funeral service will be available at www.hollyfuneralhome.com under Patricia’s obituary. The Holly Funeral Home of Waupaca is assisting the family with arrangements. In lieu of flowers, the family requests memorials be made to Wisconsin Parkinson Association, the American Cancer Society, or St. Mary Magdalene Catholic Church.

Patricia Ann Wolfe, age 80, of Waupaca, WI passed away on Monday, August 3, 2020 after a courageous battle with cancer. She was born on July 29,1940 in New London, WI; the daughter of the late Clarence and Viola (Lieg) Laux. Patty lost her mother... View Obituary & Service Information

The family of Patricia Ann Wolfe created this Life Tributes page to make it easy to share your memories.

Send flowers to the Wolfe family.