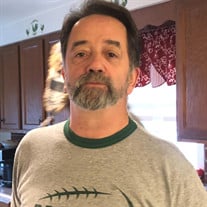 Paul R. Borst, age 60, of Wild Rose, WI, passed away suddenly on Sunday, August 15, 2021 at his home in Saxeville. He was born on July 26, 1961 in Oshkosh, WI; son of Erwin and Maxine (Koszarek) Borst. Paul attended Lordes Academy in Oshkosh. After high school he joined the U.S. Marines. On October 24, 1998, Paul married Stephanie Beier at Peace Lutheran Church in Rosendale, WI. Paul was a loving husband and father. He was a family man and a friend to many. Paul was a passionate musician where he traveled with different drum corps as a young man, and was an alumni of the Americanos. He played the drums in many bands and introduced many youth to music. Paul loved hunting and fishing. Sports were a large part of his life as well, he coached football, soccer and baseball, and loved watching all Wisconsin sports. Paul’s newest passion was brewing his own beer. He was proud to have his beers on tap at The Ding Tavern. Paul enjoyed his many “jobs”. Work was never work to Paul. He was employed at The Ding Tavern, UW-Oshkosh, played music and brewed with Craig. Paul is survived by his loving wife, Stephanie Borst; three sons, Michael (Melissa) Borst, Zachary (Lydia) Beier, and Avery (Kenzie) Borst; four siblings, Katherine Chandler, Johnathon (Sue Williams) Borst, Karen Borst, and Daniel (Mary Beth) Borst; his godchildren, Danielle Borst and Brittiny Borst; his father-in-law and mother-in-law, Dennis and Barbara Beier; and one brother-in-law, Russell (Dan Hershberger) Beier. He is also survived by numerous nieces, nephews, other relatives and friends. He was preceded in death by his parents, Erwin and Maxine Borst; his son, Joshua Borst; his first wife, Michele; and three brothers, Timothy, Andrew James, and Steven Borst. A memorial visitation will be on Sunday, August 22, 2021 from 4:00 – 7:00 PM at the Holly Funeral Home, 630 County Road G & H, Wild Rose, WI. A memorial visitation will also be held on Monday, August 23, 2021 from 10:00 AM – 12:00 PM followed by a memorial service starting at 12:00 PM at the Holly Funeral Home in Wild Rose. The Holly Funeral Home of Wild Rose is assisting the family with arrangements. We would like to express our appreciation to our Ding family because on our worst day they were at their best supporting us because that’s what family does. We are grateful but not surprised since that’s what the Ding has been for countless people over the years and we will be forever grateful, thank-you friends. Also, a big thank you to the first responders, firefighters, and police that were on the call to help.

The family of Paul R. Borst created this Life Tributes page to make it easy to share your memories.

Send flowers to the Borst family.