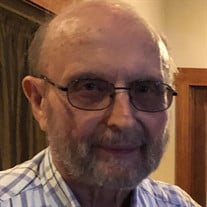 Paul Hiller Isaacson, 72, of Amherst Junction, passed away peacefully on Thursday, April 8th, 2021 in Milwaukee, WI. He was the son of Irving and Frieda (Hiller) Isaacson and born in Stevens Point on June 24th, 1948. Paul graduated from the University of Wisconsin-Stevens Point with a BS in Sociology and Psychology. He returned to the family farm in Amherst Junction where he lived his life tending the land, helping friends and family. His varied interests included fishing, gardening, music, science, reading, and walking the land. Paul was a quiet, humble, kind, and generous man with a wry sense of humor. He is survived by two sisters, Lois Barney, of Fergus Falls, MN, and Mary Schroeder of Amherst; foster brother, Michael (Karen) Johnson of Rosholt, WI; nephews, James (Ira) Schroeder , Jeremiah Johnson, Gregg (Jenny) Johnson and Joe (Ashlee) Johnson, and nieces Julie Schroeder, Jill (Jesse) Thorstad, Sara (Chad) Tate and Nettie (Erick) Brinker as well as his special friends Gary and Patty Edelburg. In addition to his parents, Paul was preceded in death by his brother, John, two brothers- in-law Jerry Barney and Bill Schroeder, niece Kristen Schroeder and his dog, Apollo. While Paul was against war and conflict, he loved his country and was very proud of his service the US Air Force as a jet engine mechanic from 1968-1971. Paul will be deeply missed by his friends and family as well as everyone whose lives he touched along the way. There will be a graveside service at 1pm on Monday, April 19th, 2021 at North New Hope Lutheran Cemetery with full military honors. Jungers-Holly Funeral Home of Amherst, WI is assisting the family with arrangements.

Paul Hiller Isaacson, 72, of Amherst Junction, passed away peacefully on Thursday, April 8th, 2021 in Milwaukee, WI. He was the son of Irving and Frieda (Hiller) Isaacson and born in Stevens Point on June 24th, 1948. Paul graduated from the... View Obituary & Service Information

The family of Paul Hiller Isaacson created this Life Tributes page to make it easy to share your memories.

Send flowers to the Isaacson family.