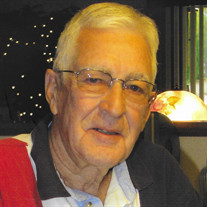 Paul H. Zimmerman was born in Nebraska on April 27, 1926 to Rev. Walter and Helena (nee Rich) Zimmerman. He joined sister Ruth (Ewoldt), brother Kenneth and they were soon to welcome baby sister Betty Lou. Having lived in several Methodist parsonages as a child, Paul told stories of crawling under the pews to the back of the church to escape worship services as his father preached and his mother accompanied hymns on the piano. He was, however, generally a dutiful son and, with sister Betty Lou, would hurry home to set the type for newsletter publications of his father's sermons, thoughts, and musings. Walter bought one of the first automobiles in their county in Nebraska, which may have inspired Paul's lifelong love of cars. He worked on cars as a teen, and after his time in WWII in the Army's 82nd Airborne Division, he met and married Clarice Benn of Ord, Nebraska. They moved to Michigan where Paul worked as a mechanic at a Massey-Harris tractor plant. Tragedy struck the family as Paul's mother, father, younger sister as well as a foster child died in a private plane crash in Kansas. Paul, Clarice, and their first born child Marsha returned to Nebraska where they lived and farmed the rental farm belonging to Clarice's parents Henry and Julia Benn. After their son Ron, daughters Laurel and Colleen were born, they moved to Lincoln, Nebraska where Paul began his career working in sales. After a transfer by Freeman Shoe Company to Fond du Lac, Wisconsin (T.E. Aherns) and then to Dubuque, Iowa (Roshek Department Store), daughter Rhonda was born. By that time, Paul was a housing inspector for the city of Dubuque. After retirement, the family moved to Epworth, Iowa where Paul found it difficult to stay retired, so he worked as a security guard at Kennedy Mall in Dubuque. Later years found them in Whitewater, Wisconsin and a few years after Clarice died in 2007, Paul moved to the Wisconsin Veteran's Home in King, Wisconsin. Over the years, Paul enjoyed playing on a bowling team, golfing, working on cars and watching the Green Bay Packers. He kept things organized, clean and consistent in his car, his garage and in his home. He passed along some of those interests to his children and grandchildren. At the age of ninety-three, Paul passed on to the next great adventure when he died on August 29, 2019. Many thanks to the staff at King for their loving care throughout his time there, and to those who participated in the Red, White, and Blue ceremony at the time of his passing. Paul was preceded in death by his parents, brother and sisters, his wife Clarice and son-in-law James Rooks. Mourning his loss and celebrating his life are his children Marsha (Tony) Starcevic, Ronald (Donna) Zimmerman, Laurel Rooks, Colleen (Peter) Kwong, Rhonda (Daryl) Pollock, ten grandchildren and eleven great-grandchildren. A Graveside Service of Remembrance will be at King Veteran Cemetery, Waupaca, WI at 11:00 a.m. on Monday, October 21, 2019.

The family of Paul H. Zimmerman created this Life Tributes page to make it easy to share your memories.

Send flowers to the Zimmerman family.