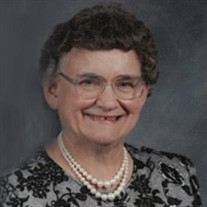 Pauline Lueders died on August 28th, 2020 at Bethany Home in Waupaca, Wisconsin. Pauline Louise Poehler was born on May 3, 1927 to Frederick and Elda Poehler. She was born and raised in the township of Sevastopol on an 80 acre farm 7 miles north of Sturgeon Bay in Door County, Wisconsin. At age 5 she started first grade, attending Sevastopol Consolidated Grade and High School for 12 years. After the War ended in 1945, Pauline enrolled at UW-Madison along with her brother Henry. She enrolled in the school of Home Economics, graduating in 1948. Pauline also studied at the Lutheran Bible Institute in Minneapolis, MN. Those Institute studies served her well in her active church life. Pauline worked professionally as a home economist during the 1950s and 1960s for University of Wisconsin Extension. In her professional life in Buffalo and Trempealeau Counties, she worked with women and 4-H families. She continued her 4-H work after marriage too. While in India she started a 4-H club for missionary children. She coordinated projects where she taught cooking, sewing and public speaking. After returning to the US, she was a project leader in Phillips, Wisconsin for cooking and sewing. She was an active 4-H leader for a group in Waupaca that her children were involved in. Pauline travelled as a young woman when in 1961 she did a world tour to Europe, Asia and Africa when jet travel was a new thing. Being a world traveler and college graduate, she was a progressive woman for the time. There weren't many women doing those things back then. She met her future family while visiting her college friend, Marian Billings Lueders, in India. Later in life she enjoyed travel to visit family in England, Norway, Colorado, California and places all over the Midwest. Her friend Marian died in Rajamundry, India in 1964 where Fred and Marian served as missionaries. Pauline married Fredrick Lueders in 1965 in Door County, and bravely acquired an instant family with four young children: David, Ellen, Cheryl, and Corrine. Shortly after, Pauline and Fredrick returned to India as missionaries, where Fredrick was called to serve the Andhra Evangelical Lutheran Church in Southern India in rural development, assisting outcaste farm people until 1969. In addition, Pauline and Fred have three children: Carl, John and Elizabeth. After returning from India, Pauline and Fred moved to Phillips, Wisconsin where Fred served St. John's Lutheran Church. They came to Waupaca in 1976 where Fred served Shepherd of the Lakes Lutheran Church for 14 years. Pauline supported her husband’s work during these years, as well as using her experience and talents to serve the church in many other ways. She served as leader of various church groups during her many years in Waupaca and as a participant in many other bible studies, women's church circles, and church choir. She was also active in the Waupaca Women’s Club. Pauline had so many interests and enjoyed a rich fulfilling life. She played piano and organ earlier in her life and had her own organ that she continued to play at home for many years. She encouraged and required all her children to take lessons and be active in music. Pauline loved to travel to see friends and family. She enjoyed watching Green Bay Packers and Wisconsin Badgers football games. Pauline loved flower and vegetable gardening. She continued that love up until the spring of 2020. She enjoyed having sales of her perennial plants from her Waupaca home. She traded plants with family and friends. Pauline was an avid reader - of many kinds of books - novels, biographies, history. She loved writing cards and letters to family and friends – a real treat to all receiving hand-written notes in this digital age. Pauline was an avid bridge player and played with a group of friends until the pandemic put a stop to that favorite activity. She liked card games of all kinds. Pauline enjoyed sewing and made many quilts for Lutheran World Relief right up until the end of her life. Pauline is survived by her children David Lueders (Debra), Ellen Terwilliger (Steve), Cheryl Habesland (Geir), Corrine Denker (Steve), John Lueders (Kerry), Beth Scharmer (Patrick); as well as many grandchildren, a great granddaughter, nieces and nephews. She was preceded in death by her husband Fredrick, her father, Frederick Poehler II and her mother, Elda (Meyer) Poehler, her brother Henry Poehler III (Betty), her sister Helen Haugen (Glen), her brother Edwin Poehler (Irene), her sister Dorothy Kurlinski (Thaddeus), and her son, Carl who died in infancy. The family would like to thank Bethany Home and Thedacare Hospice for the kind and excellent care they provided Pauline during a very difficult time. The staff not only took care of Pauline's physical needs but her emotional and spiritual concerns as well. Holly Funeral Home of Waupaca is serving the family. In lieu of flowers, memorials in Pauline's honor may be given to: Lutheran World Missions, Bethany of Waupaca, Trinity Lutheran Church of Waupaca or the charity of your choice. An online service will be live-streamed on Wednesday, September 23, 2020 at 11:00 AM at Click Here In person services may be held at a later date, when it is safe to do so. Burial is at Central Wisconsin Veterans Memorial Cemetery in King. Family photos are available to view at Click Here

Pauline Lueders died on August 28th, 2020 at Bethany Home in Waupaca, Wisconsin. Pauline Louise Poehler was born on May 3, 1927 to Frederick and Elda Poehler. She was born and raised in the township of Sevastopol on an 80 acre farm 7 miles... View Obituary & Service Information

The family of Pauline L. Lueders created this Life Tributes page to make it easy to share your memories.

Send flowers to the Lueders family.