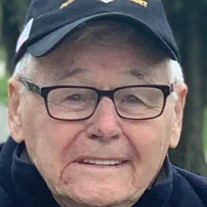 Peter G. Brandt, age 88 of Waupaca passed away on Sunday, March 29, 2020 at the Wisconsin Veterans Home in King. Peter was born November 9, 1931, the son of the late Peter Schneekloth and Helen Brandt. He married Sherry Pope on November 2, 1956... View Obituary & Service Information

The family of Peter G. Brandt created this Life Tributes page to make it easy to share your memories.

Send flowers to the Brandt family.