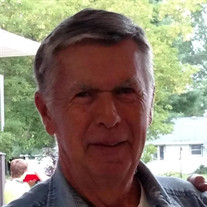 Philip F. Barden, age 75, of Amherst, passed away Thursday, December 9, 2021 peacefully at his home surrounded by his family. Phil was born August 29, 1946 in Stevens Point; the youngest son of the late Charles and Leone (Madsen) Barden. He attended Amherst Schools and, after graduating, enlisted in the U.S. Army in 1966. Phil served 2 tours in the Vietnam Conflict and was honorably discharged in 1969. Upon coming home, Phil met the love of his life, Charlet Pionkowski on New Year’s Eve at Club Orlow. After dating for a year, they married February 20, 1971 in Amherst, WI and earlier this year celebrated 50 years of marriage. For over 30 years, Phil worked at McCain Foods. Through the years, he also had jobs at both Clinton and Krogwold Potato farms, he drove school bus and he hauled milk for Peterson Bros. and sometimes taking his children as his co-pilot. In his retirement, Phil continued to maintain a few head of cattle at his hobby farm and help his family with hay each year to sustain their livestock. Phil was a cowboy at heart, which began when he and a group of friends started the Amherst Boots and Saddle Club in 1966. Upon his death, Phil was still the Club’s President. The stories of his cowboy-antics are endless! However, the only thing that brought him more joy than being on horseback himself was watching his grandchildren compete in the varies sports they loved. Phil is survived by his wife Charlet Barden of Amherst; four children; John (Melissa) Barden of Rosholt, Jodi (Josh) Dambroski of Amherst, Joleen (Shawn) Groshek of Custer, and Michael (Sara) Barden of Amherst and 12 grandchildren Noah, Claire, Isabelle, Brady, Landon, Kylie, Morgan, Peyton, Haley, Ethan, Gemma Jo and Lincoln. Phil was preceded in death by his parents and his brother, Charles Jr. A celebration of life will be held on Monday December 20, 2021 at 1 P.M. at the Jungers-Holly Funeral Home of Amherst, WI. Burial will follow at the Greenwood Cemetery with Military Honors. Pastor Kari Riley will officiate. A memorial gathering will be held on Monday December 20, 2021 from 11 A.M. until the time of the service at 1 P.M.at the Jungers-Holly Funeral Home. Phil was very concerned about the amount of food being wasted in the world today. Therefore, in lieu of flowers, the family asks donations be made to TRACK food pantry (Tomorrow River Area Community Kitchen). To honor and celebrate Phil’s love of rodeo and all things cowboy, please wear your boots, your jeans or any Western-wear you may have.

Philip F. Barden, age 75, of Amherst, passed away Thursday, December 9, 2021 peacefully at his home surrounded by his family. Phil was born August 29, 1946 in Stevens Point; the youngest son of the late Charles and Leone (Madsen) Barden. He... View Obituary & Service Information

The family of Philip F. Barden created this Life Tributes page to make it easy to share your memories.

Send flowers to the Barden family.