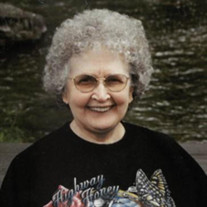 Rachael Marie (nee: Ruediger) (Bonnell) Pomerenke, age 93, of Waupaca, WI, passed away Tuesday, August 25, 2020 the way she wanted, in her sleep, in her own bed. She was born in the Town of Amherst on July 14, 1927 to Clyde and Bessie (Dwinell) Ruediger. After graduating from Amherst High School, she went on to attend nursing school in Milwaukee to become a registered nurse and then she went on to attend Oshkosh Business School. In 1947, Rachael married DuWain (Dewey) Bonnell and they had five children. They later divorced. In 1954 after the passing of her in-laws, Rachael and Dewey took in Dewey’s youngest brothers, Allen “Barney” and Leon, to finish raising them. On May 8, 1976, Rachael married Orville Pomerenke and they were married for 32 years until his passing on May 27, 2008. Rachael worked in the nursing field for many years both at the Wisconsin Veterans Home in King and Crystal River Nursing Home in Waupaca until her health required her to retire. She also worked at the dime store, the army recruiting office, and she managed the Waupaca Kirby Service Center for 17 years. Rachael was very active in the community throughout the years. She was a member and past president of the American Legion Auxiliary Post #161 of King and member of the VFW Auxiliary Post #1037 of Waupaca. Rachael was the past president of the Daughters of the American Revolution and was one of the leaders of the Frontiers Men Persition Marching unit. She was very active with 4-H having been the general leader for the Paca Pride 4-H Club and in later years was a superintendent at the county fair in the open class department. Rachael enjoyed singing and was a charter member of the local Sweet Adelines International singing group and this year would’ve marked 50 years for her. She was a life member of St. Olaf’s Episcopal Church in Amherst. Rachael will be dearly missed by all of her family and friends. Rachael is survived by her five children, Becky (Frank) Lawrence, Doreen (Joe Miller) Papineau, Leslie (Frank “Butch”) Sojka, DuWain (Kathy) Bonnell, and Sara (Brian) Knutson; two foster sons, Robert “Schuster” (Charlene) Schulz and Gary (Tara) Hoefferle; 11 grandchildren; 14 great-grandchildren; 2 great-great-grandchildren; and six step-children and their extended families. She was preceded in death by her parents, Clyde and Bessie Ruediger; her husband, Orville Pomerenke; her ex-husband, DuWain Bonnell; a son-in-law, Chester “Chet” Papineau; a grandson, Chester “Joey” Papineau; a great-grandson, Justin Ochs; one brother, Albert (Mary Pat) Ruediger; one sister, Alice Ochs; a brother-in-law, Allen Bonnell; and two nephews, Ed Ochs and Paul Ruediger. A Visitation will be held on Sunday, August 30, 2020 from 4:00 – 7:00 PM at the Holly Funeral Home in Waupaca, WI. A Graveside Service will be on Monday, August 31, 2020 at 2:00 PM at the Central WI Veterans Memorial Cemetery in King, WI. The Holly Funeral Home of Waupaca is assisting the family with arrangements. Holly Funeral Homes wants to remind the public that no more than 75 people will be allowed in the funeral home at one time with the wearing of masks and physical distancing observed. We sincerely encourage each person to make your decision whether to attend a visitation and/or service based on the best interest of your health and that of your community.

Rachael Marie (nee: Ruediger) (Bonnell) Pomerenke, age 93, of Waupaca, WI, passed away Tuesday, August 25, 2020 the way she wanted, in her sleep, in her own bed. She was born in the Town of Amherst on July 14, 1927 to Clyde and Bessie (Dwinell)... View Obituary & Service Information

The family of Rachael M. Pomerenke created this Life Tributes page to make it easy to share your memories.

Send flowers to the Pomerenke family.