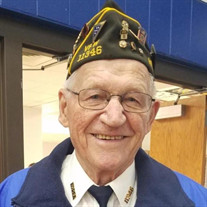 Raymond A. Patoka was called to eternal rest on Thursday, October 1, 2020 with Lucille, his loving wife of 70 years, holding his hand and praying for him to be at peace after a wonderful, full life of 93 years. "I'm ready. I've had lots of blessings. There's a time to start and a time to end…" Ray 9.29.2020 Ray was born on May 13, 1927 to Isadore and Francis (Konkol) Patoka in the town of Amherst. He attended local schools and throughout his young life he worked on the family farm. At the age of 20, he decided to "take his shot" at moving to Milwaukee, working at A.O. Smith the first two winters while coming back to work on the family farm during the summer. By this time he was courting Lucille Trzebiatowski, the love of his life, who happened to be a next door neighbor. Ray and Lucille were married on September 9, 1950, originally planning an October wedding, but Uncle Sam had an alternate plan. Ray was proud to serve his country for two years, in the Army, during the Korean War. He then joined Lucille and his newborn son, Ron, in Milwaukee where they raised their growing family for 13 years before relocating back to the Amherst area for the remainder of his life. Ray had a tremendous work ethic and was a valued employee at Blatz Brewing Co. for 13 years, Multi-Pak Corp. for seven years and Del Monte Foods for 15 years until his retirement in 1989. Ray wasn't one to sit still so he spent the next 15 years as a seasonal employee at Ore-Ida until he finally decided it was time to relax and retire full-time. Ray and Lucille's beautiful union created a large, loving family. Family gatherings, activities and celebrations were Ray's greatest joy. He leaves behind his adoring wife of 70 years Lucille; his children Ron, Bob (Bonnie), Ruth (Gene Allen), Tom (Sandy), Gilbert and Patti (Dan Rashke); his grandchildren Chad (Hayley) & Jeremy Patoka; Corey (Becky), Dallas & Lucas Allen; Vince (Andy Ambrosius) & Aubrey Patoka; Mitchell, Cameron & Brett Patoka and Quinn (Ellie) and Tia Rashke; and his great-grandchildren Aven and Bria Patoka; Seth, Randi, Nathan & Chloe Allen; Addison Allen and Paige Allen. Ray has joined his son, Mike, great-granddaughter Gabriella Patoka and great-grandson, Austin Allen. In addition to his immediate family, Ray is survived by two brothers, Clifford and Daniel Patoka. His parents, three brothers and four sisters preceded him in death. A Memorial Mass will be held on Thursday, October 8, 2020 at 11:00 AM at St. Mary of Mt. Carmel Catholic Church followed by a Public Graveside Service with Military Honors at 12 PM at St. Mary of Mt. Carmel Catholic Cemetery. Father Brandon Guenther will officiate. Ray was a proud member of the VFW and a longtime member of the Holy Name Society. Memorial contributions can be made to VFW Tomorrow River Memorial Post #11346, PO Box 1, Amherst, WI 54406 or St. Mary of Mt. Carmel Catholic Church, PO Box 280, Amherst, WI 54406-0280. Watch out, St. Peter. When my time is up, I'm gonna round third and make a beeline for heaven before you close those gates. Yes, my body may be a little bloody. I may have scars on both knees. But I'll be running full speed right at you and I'll beat the throw home before you can say, "you're outta here." Please follow all Covid-19 safety precautions including a face mask and adherence to social distancing.

Raymond A. Patoka was called to eternal rest on Thursday, October 1, 2020 with Lucille, his loving wife of 70 years, holding his hand and praying for him to be at peace after a wonderful, full life of 93 years. "I'm ready. I've had lots of blessings.... View Obituary & Service Information

The family of Raymond A. Patoka created this Life Tributes page to make it easy to share your memories.

Raymond A. Patoka was called to eternal rest on Thursday, October...

Send flowers to the Patoka family.