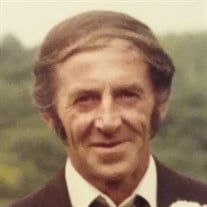 Raymond (Ray) Kenowski, 95, Town of Amherst, Portage County, Wisconsin, died Thursday March 19, 2020 in Stevens Point after a short hospitalization. He was born on January 7, 1925 to the late Felix and Martha (Werowinski) Kenowski. He was married to Delores Knitter at Rosholt in June 1954. They had seven children together. Delores died in 1972. From 1982 to 1991 he was married to Phyllis Zaruba of Amherst. Ray spent most of his life as a farmer in the Fancher area. He worked briefly in Milwaukee during his youth, and later did some on-the-side trucking work. But farming was his passion. He loved his John Deere tractors, and he loved his eggs for breakfast. He was very energetic, hardy, and hard working. He had always helped out his dad, Felix, who lived nearby. He was very independent, but also kind in giving a helping hand to others. He remained active and vigorous well into his eighties, and when asked would respond, "I'm strong as an ox". He was blessed with good health up until age 90. He is survived by a sister, Bernice Laskowski, Stevens Point and by a brother, Henry (Adeline) Kenowski, Plover. Surviving children are Rita (Paul) Kropidlowski, Audrey (David) Roberts, Kurt Kenowski, Maureen Mason, Brenda Kenowski, Kenneth Kenowski and Alan Kenowski. All live in the Amherst/Stevens Point area. He has 10 grandchildren, 17 great-grandchildren and many nieces and nephews. Ray was preceded in death by brothers Ambrose and Gregory and by sisters Tekla (Prutz) and Evelyn (Loecher). Also by two infant sisters and one infant brother. Due to restrictions resulting from the coronavirus, a small, private burial ceremony was held. Online condolences are available at www.hollyfuneralhome.com. The Lord Jesus took our beloved father. He will be well missed. Forever loved by his family.

Raymond (Ray) Kenowski, 95, Town of Amherst, Portage County, Wisconsin, died Thursday March 19, 2020 in Stevens Point after a short hospitalization. He was born on January 7, 1925 to the late Felix and Martha (Werowinski) Kenowski. He was... View Obituary & Service Information

The family of Raymond (Ray) Kenowski created this Life Tributes page to make it easy to share your memories.

Send flowers to the Kenowski family.