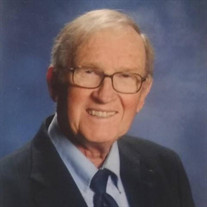 Fredrick Lueders died on June 30th, 2020 at Bethany Home in Waupaca, Wisconsin. Fredrick Gustaf Alfred Lueders was born on November 9, 1927 to Edward and Harriet Lueders and raised on their dairy farm in Cedarburg, Wisconsin. He attended a one room school through grade eight and graduated from Cedarburg High School in 1945. Fred attended UW-College of Agriculture in Madison, Wisconsin. He received his MS in 1952 and his PhD in 1970. He served the US Army from 1952-1954. Fred graduated from Northwestern Lutheran Seminary in Minneapolis. Fred’s first served a two-point parish in Swanburg and Cross Lake, Minnesota. Fred married Marian Billings of Friendship, Wisconsin in 1952. Fred and Marian had five children: David, Ellen, Cheryl, Diane and Corrine. Marian died in Rajamundry, India in 1964 where Fred and Marian served as missionaries. Fredrick was called to serve the Andhra Evangelical Lutheran Church in Southern India in rural development (similar to a County Agricultural Agent), assisting outcaste farm people until 1969. Fred married Pauline Poehler of Door County in 1965. They have three children: Carl, John and Elizabeth. After returning from India Fred served St. John’s Lutheran Church in Phillips, Wisconsin for 6 years. He came to Waupaca in 1976 to serve Shepherd of the Lakes Lutheran Church for 14 years. After his first retirement Fred had two interim churches he served: Grace Lutheran Church in Wisconsin Rapids and a two-point parish at Harrisville, Wisconsin. Fred was chaplain at Bethany Nursing Home for eight years. Fred served as the chaplain of the American Legion Post at the Veteran’s Home in King for over 25 years. Fred enjoyed fishing on the Chain of Lakes with friends and hunting in Price County. He enjoyed photography from a young age. Slide shows and storytelling were an important part of Fred’s personal and professional life. Fred was a lifelong learner of history of many regions and periods and the study of Wisconsin Native American culture. Fred’s farm roots carried through into being a gardener throughout his life. Fred remained active in senior bowling and going up north to the family cabin. Besides taking care of the people in his life, Fred Lueders was a caretaker of the earth and believed in good stewardship of our environment. Fred is survived by his wife, Pauline; his children David Lueders (Debra), Ellen Terwilliger (Steve), Cheryl Habesland (Geir), Corrine Denker (Steve), John Lueders (Kerry), Beth Scharmer (Pat); his sister Janet Waters (Gordon), Sharon Eskola (Ed) and his sister-in-law, Delores Lueders as well as many grandchildren, a great granddaughter, nieces and nephews. He was preceded in death by his infant brother, Kenneth, his father, Edward Sr. Lueders and his mother, Harriet (Jahn) Lueders, his brother Edward Jr. Lueders, his daughter, Diane and son, Carl who both died in infancy. Fred was a good listener and friend to family, friends and parishioners. He shared his faith through his work and deeds. A life truly well lived. The family would like to thank Bethany Home and Thedacare Hospice for the kind and excellent care they provided Fred during a very difficult time. The staff not only took care of Fred’s physical needs but his emotional and spiritual concerns as well. Holly Funeral Home of Waupaca is serving the family. In lieu of flowers, memorials in Fred’s honor may be given to: Lutheran World Missions, Bethany of Waupaca, Trinity Lutheran Church of Waupaca or the charity of your choice. An online service will be live-streamed on Saturday, July 25th, 2020 at 11:00 AM at click here In person services may be held at a later date, when it is safe to do so. Burial is at Central Wisconsin Veterans Memorial Cemetery in King. Family photos are available to view at click here

Fredrick Lueders died on June 30th, 2020 at Bethany Home in Waupaca, Wisconsin. Fredrick Gustaf Alfred Lueders was born on November 9, 1927 to Edward and Harriet Lueders and raised on their dairy farm in Cedarburg, Wisconsin. He attended a one... View Obituary & Service Information

The family of Reverend Fredrick Lueders created this Life Tributes page to make it easy to share your memories.

Send flowers to the Lueders family.