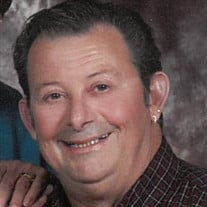 Richard “Burner” Colborn, passed away at the Veterans Memorial Hospital in Madison, WI on Thursday, September 26, 2019 at the age of 72, after an extended illness. He was born in the town of Louisville, IL on October 13, 1946. Burner attended school in Albany, WI and then entered the U.S. Army serving during Vietnam as an aircraft engine repairman. He was honorably discharged in 1968 and was a life member of Tomahawk VFW Post 2687. Most of his career was spent as a Local 498 ironworker in Rockford, IL, working on several projects including the roof at Miller Park. He loved living life on the edge, especially when riding his Harley he was the true dare devil and feared nothing. A real Harley man, ever since owning his first at 16 years old. He also enjoyed some of the safer things in life as boating, water skiing, fishing, hunting and ATV riding of course somehow, he managed to hurt something but just laughed it off. There was a very soft side he cared and helped where and when he was needed. He took on the role helping raising his nephew’s and niece when the need came and not complaining. He would say he kept those boys so busy cutting wood for two houses that they didn’t have time to get into trouble, he was proud of how they grew up. Burner had a great big heart but not everyone saw it. He had many friends and was grateful for them all. Burner is survived by his beloved sweetheart; Debra Carlson for the past 18 years, his loving daughter, the apple of his eye; Kelly (Scott) Wywialowski and his grandchildren, his pride and joy, Caden, Morgan and Zolton; his son, Rich (Nikki) Colborn. His loving extended family; Lisa (Chris) Murphy, their children, Ciara Cameron, Carson; Stephani (Ryan Bentley) Carlson, their children Alycia, Aubrey, Liam; Scott (Nikki) Carlson, their children, Thomas, Jillian, Julianna; Burner’s siblings; Ronald Colborn, Karen Davis, Marilyn (Glenn) Sieren, Peggy (Bill) Leutenegger, Cindy Crandall; also survived by many nieces, nephews, other relatives and friends. Burner is preceded in death by his parents, Lawrence Colborn and Helen Davis; his grandparents, aunts and uncles. Visitation will be held from 11:00 AM until 1:00 PM on Thursday, October 3rd at Holly Funeral Home in Wild Rose, WI. Graveside service will follow the visitation at Poy Sippi Cemetery in Poy Sippi. Online condolences available at www.hollyfuneralhome.com

The family of Richard "Burner" Colborn created this Life Tributes page to make it easy to share your memories.

Richard “Burner” Colborn, passed away at the Veterans Memorial...

Send flowers to the Colborn family.