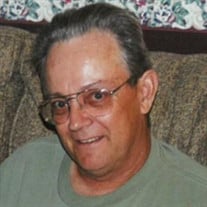 Richard “Dick” G. Pearson, age 78, of Iola, WI, passed away on Friday, September 24, 2021 at ThedaCare Regional Medical Center in Neenah, WI. He was born March 28, 1943 in La Crosse, WI; son of Harold and Anita (Ellenze) Pearson. Dick was drafted in the U.S. Army on December 7, 1964 and was honorably discharged on December 2, 1966. On May 9, 1970, he married Barbara Bauer at St. Matthew’s Catholic Church in Oak Creek, WI. Dick worked many years at Case, Jacobson, Briggs & Stratton, and he retired from La Valle Industries in 2007. He was a lifelong hunter and fisherman. He enjoyed spending time with his family and working on his property. Most of all, Dick loved traveling and being with the love of his life through all of the adventures. He will be deeply missed by all of his loving family and many friends. Dick is survived by his wife of 51 years, Barbara Pearson of Iola, WI; his three sons, Mark (Amy) Pearson of Nelsonville, WI, Christopher (Vera) Pearson of Kenosha, WI, and David (Jennifer) Pearson of Waupaca, WI; six grandchildren, Drake (Breanna) Pearson of Amherst Jct., WI, Heather Pearson of Nelsonville, WI, Sophia Pearson of Kenosha, WI, Ryan (Kayla) Serpe of Waupaca, WI, Zachary Serpe of Waupaca, WI, and Cole Pearson of Waupaca, WI; one brother, Harold (Sandy) Pearson, Jr. of Greenfield, WI; two sisters, Karon (Harry) Dean of Milwaukee, WI and Betty (Bob) Washa of Las Vegas, NV; and also by numerous nieces, nephews, other relatives and friends. He was preceded in death by his parents, Harold and Anita Pearson; and a sister and brother-in-law, Toni (Jerry) Bright. A Funeral Service will be on Wednesday, September 29, 2021 at 1:00 PM at the Nelsonville Evangelical Lutheran Church, 3061 Oak Street, Nelsonville, WI 54458. Reverend Dwight Anderson will officiate. A visitation will be held on Wednesday from 10:00 AM – 1:00 PM at the church. Full military honors will be performed following Dick’s funeral service on Wednesday afternoon. In lieu of flowers, memorials are appreciated to the Wisconsin Veterans Home, N2665 County Road QQ, King, WI 54946. The Jungers-Holly Funeral Home of Amherst is assisting the family with arrangements.

The family of Richard G. Pearson created this Life Tributes page to make it easy to share your memories.

Send flowers to the Pearson family.