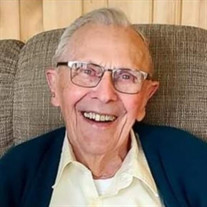 Robert A. “Bob” Angsten, age 94 of Waupaca, WI passed away on Saturday, October 30, 2021 at his home surrounded by his loving family. Bob was born on January 21, 1927; son of the late John and Ida (Dreesman) Angsten in Burlington, WI. On May 31, 1954, he married his first wife, Shirley McNamara in Peru, IN. She preceded him in death on August 9, 1983. He owned and operated Hansen’s Furniture & Appliance Store in Waupaca for eight years. On January 19, 1985, he married Elizabeth “Libby” Bloom in Milwaukee, WI. She also preceded him in death on September 8, 2015. Bob enjoyed mowing his lawn and doing yard work. He was known for his hard work outdoors. Bob is survived by his sons; Michael (Debra) Angsten of Gladstone, MI; Tim (Mary) Angsten of Waupaca, WI; Patrick Angsten of Nixa, MO; step-children; Charles (Sharon) Bloom III of Brookfield, WI; Barbara (Dennis) Wasylyk of Eden Prairie, MN; Thomas (Robin) Bloom of Scottsdale, AZ; fifteen grandchildren; thirty-five great-grandchildren; also many other relatives and friends. Bob is also preceded in death by his sisters; Genevieve Dineen and Lucille Cook. A Funeral Mass will be held at 11:00 AM on Friday, November 5, 2021 at St. Mary Magdalene Catholic Church in Waupaca. Visitation will be held from 10:00 AM until time of Mass at the Church. Burial will follow at St. Mary Magdalene Catholic Cemetery. Holly Funeral Home is assisting the family with arrangements. Online condolences available at www.hollyfuneralhome.com Bob’s quote “Always have an attitude with gratitude”.

The family of Robert "Bob" A. Angsten created this Life Tributes page to make it easy to share your memories.

Send flowers to the Angsten family.