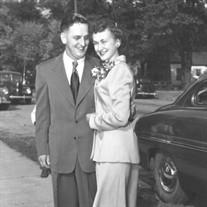 Robert (Bob) Harold Whitman, age 93, of Waupaca, passed away, from complications due to COVID-19, on Tuesday June 16th, 2020 at Bethany Home. He was born on May 21st, 1927, in Stevens Point. He was son to the late Milton and Ada Mae (Gustin) Whitman. Robert had five siblings: Harold Whitman, Doris Charlesworth, Kathryn Lubinski, Dorothy Clark and Marvin Whitman. Bob grew up in Hancock, WI, and graduated from Hancock High School in 1944. He enlisted in the US Navy on February 3rd, 1945. He served in the Pacific for three years until being honorably discharged on March 22, 1948, with a rank of Motor Machinists Mate, Third Class. Robert lost his older brother Marvin, on the USS Drexler in WWII. At the Drexler reunions, he met shipmates who had served with Marvin in his last days. Bob supported the Drexler Reunion Association in many ways. Subsequent to the Navy, he worked/owned a gas station in Hancock. He wed Beverly June Person on September 30, 1950; a marriage that would last nearly 70 years. They continued to live in Hancock before moving to Wisconsin Rapids, where Bob worked in a paper mill. Deciding the mill wasn't for them, they moved to Waupaca, where they would raise their family and spend the remainder of their lives. On moving to Waupaca, Robert owned Bob's Standard Service, a Standard Oil gas station on Fulton St. for approximately 15 years. Bob and Bev then owned Bob's Distributing Company for several years, which they ran out of their home. Eventually, Bob hired on with Holly Funeral Home, where he worked until he retired in the 1990's. Robert was a volunteer firefighter with Waupaca Fire Department, of which he is a life member. When Bob was elected to Waupaca County Supervisor, he was the youngest member and after serving for 38 years, he was the most senior serving member. He spent 10 years on the board of Lake View Manor in Weyauwega. Robert was a member of VFW Post 1037, the American Legion Post 0812 and the 10 o'clock coffee club. He often volunteered at the Veterans Home in King as well as the food bank in Waupaca. Somewhere in all of that, he also performed EMT work and delivered a baby boy while en route to the hospital. Bob was well known in the community and much loved. Bob had a green thumb, which he put to good use after retirement. He grew the absolutely best tasting tomatoes, which often won ribbons at the Waupaca County Fair. He was a woodworker whose creations are cherished by his descendants. His favorite song was "There's a Tear in my Beer" Bob is also a cancer survivor of 22 years. Robert was preceded in death by his wife, Beverly Whitman, of 69 years. She passed away on June 13th, 2020. Survivors include his sister, Doris Charlesworth, Stevens Point, WI, half siblings Mary Beth Whitman, Manteca, CA; Martin (Patricia) Whitman, Manteca,CA, as well as his children: Rick (Michelle Kozlow) Whitman, Livingston, MT; Marvin (Rhondalyn) Whitman, Menomonie, WI; Charles (Cynthia) Whitman, Waupaca, WI; Diane (Herb) Shaver, Denver, CO; Nine grandchildren, 9 great-grandchildren (with another one on the way) as well as many nieces and nephews. A Memorial Service will be held on September 30, 2020 at 6 PM at the Holly Funeral Home in Waupaca. Memorial Visitation will be held on Wednesday, from 4 PM until the time of the service at the funeral home. Interment of Cremains will be held at Central WI Veterans Memorial Cemetery, Town of Farmington, Waupaca Co., WI. The family would like to extend a special "Thank you" to Linda Gardner, Hope McIntyre and all of the staff at Bethany Home for their kind and compassionate care. The family would also like to thank the Holly Funeral Home for assisting with arrangements. In lieu of flowers, please make a donation in Bob's name to the USS Drexler Reunion Association or to a charity of your choice.

Robert (Bob) Harold Whitman, age 93, of Waupaca, passed away, from complications due to COVID-19, on Tuesday June 16th, 2020 at Bethany Home. He was born on May 21st, 1927, in Stevens Point. He was son to the late Milton and Ada Mae (Gustin)... View Obituary & Service Information

The family of Robert "Bob" H. Whitman created this Life Tributes page to make it easy to share your memories.

Send flowers to the Whitman family.