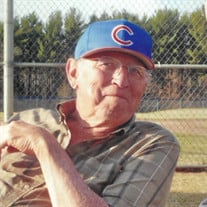 Robert “Boob” C. Weller, Jr., age 85, died peacefully on Monday, June 15, 2020 in Waupaca, WI. He was born March 26, 1935 in Waupaca; son of Robert C. and Isabel (Potts) Weller. A lifelong resident of Rural, he was blessed to have lived his entire life there. Bob received his iconic nickname “Boob” at a young age from a boy who was picking on him at school, and, all these years later, the nickname lived on. After graduating from Waupaca High School, he spent one year at Luther College in Iowa before transferring to UW-Stevens Point. Following graduation, he enlisted in the U.S. Army on October 12, 1957 and was honorably discharged on April 11, 1958. Bob decided to go back to school after his discharge and returned to receive a degree in secondary education at UW-Oshkosh. In 1962, he married Ellen M. Bishop in Waupaca and together they raised three sons. After their marriage, Bob taught at the Wild Rose School District for one year, bought a tavern in King and named it Boob’s Bar, a bar/restaurant now known as the Chain O’Lakes Bar and Grill, he dabbled as a stockbroker working out of his home, and worked 26 years for the U.S. Postal Service as a rural mail carrier in Waupaca and Scandinavia, retiring in 1995. During and after his working years, Bob also helped run his family’s business, Weller’s Store, in Rural. It has been run by his family since the 1920’s. Bob was a people person and always said the people he’s met along the way have helped shape his life. Baseball was a big part of his life. Besides being a lifelong Chicago Cubs fan, he coached the American Legion baseball team in Waupaca for many years and spent 60+ years with the Waupaca Lakemen as a player and assistant coach. He will be dearly missed by all of his loving family and many, many friends. Bob is survived by his wife, Ellen Weller of Waupaca, WI; three sons, Lino Pulido of Las Vegas, NV, Bob Weller of Waupaca, and Steve (Tammy) Weller of Waupaca; and two grandsons, Cody and Jacob Weller of Waupaca. He was preceded in death by his parents, Robert and Isabel Weller. A Private Family Memorial was held at the Holly Funeral Home in Waupaca. Burial took place at Rural Cemetery in the Town of Dayton, Waupaca Co., WI. In lieu of flowers, a memorial has been established in Bob’s name. The Holly Funeral Home of Waupaca is assisting the family with arrangements.

The family of Robert "Boob" C. Weller, Jr. created this Life Tributes page to make it easy to share your memories.