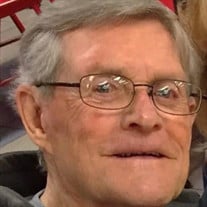 Robert Alan Gabriel, age 88, of Waupaca, WI, passed away peacefully at home on August 9, 2020 with his long-time loving partner, Diane Handrich, by his side. Bob Gabriel was born on February 6, 1932 in Lena, WI as a middle child to Thelma and Henry Gabriel. After several years of moving due to his father’s work, the family finally settled in Menomonie, WI. Bob was a gifted young athlete and excelled in competitive sports at Menomonie High School where he played tennis, baseball, basketball and football. This exceptional athletic ability carried throughout Bob’s entire life. His passion for athletics, after graduation, took him to La Crosse State College pursuing a degree in PE. But after a year the Korean War had begun and he enlisted in the Navy, was trained as a hospital corpsman, and then was attached to the Medical Corps of the Marines and stationed at Camp Lejeune, NC. During this time Bob married his high school sweetheart, the former Nancy Kaunzner of Menomonie, WI, and their son, Jeffrey, was born. After completing his military duties, Bob enrolled at University of Wisconsin-Madison, where he obtained his Bachelor of Science degree in Physical Therapy, and their daughter, Cynthia, was born. He completed his Internship at Children’s Hospital in Grand Rapids, MI, and then moved his family to Sheboygan, WI, where he began his thirty-five-year career in Physical Therapy. Several years later Bob moved his family to New London, WI. His love for Physical Therapy was far reaching, working in hospitals, private practice, sports medicine, nursing and care facilities. Bob was talented and always interested in learning new and more effective ways of addressing physical issues, and was before his time in many areas such as myofascial release techniques, controlled electrical stimulation for healing injuries, and geriatric physical therapy. Community minded, Bob was a long-time member of the New London Rotary, as well as serving five terms on the New London School Board, half of that time as president. An avid outdoorsman in his earlier years he enjoyed deer and duck hunting, snowmobiling, skiing and boating. He especially was fond of golf and any day he could golf was a good day. Bob is survived by his long-time partner, Diane Handrich of Waupaca, WI. Together they shared a loving and joyful life. Bob is also survived by his son, Jeffrey Gabriel (New London, WI), daughter Cynthia Gabriel and son-in-law Eric Stromerson (Bellingham, WA), granddaughter Arielle Gabriel and great-grandson Evan Stern (New London, WI), step granddaughter Danielle Zuege and step great-granddaughters Avrie Muskovitsch and Jaycie Peotter (New London, WI), sister Mary Ann Gabriel (Parker, CO), sister-in-law Betty Gabriel (Baden, PA), former spouse Nancy Gabriel (New London, WI), five nieces and one nephew. Grandpa Bob was loved by Troy and Heidi Handrich, and their children Bennett, Owen and Madelin (Pulaski, WI), Tom Handrich and sons Carson and Eli (Hastings, MN), and Trent and Sarah Handrich, and their children Holly and Rex (Waupaca, WI). Bob was predeceased by his parents Thelma and Henry Gabriel, and brother, Russell Gabriel. Bob will be placed to rest with a private family graveside service at the Central Wisconsin Veterans Memorial Cemetery in King, WI where full military honors will be performed. A Celebration of Bob’s Life will be held at a later date at the Chain Bar and Grill in Waupaca, WI. The Holly Funeral Home of Waupaca is assisting the family with arrangements. Memorial donations may be sent to the Wisconsin Physical Therapy Association, the profession that Bob loved. This fund advances any award scholarships to students pursuing careers in physical therapy as well as grants to support research in the practice of physical therapy https://wpta.org/wpt-fund/ The family wishes to express gratitude to ThedaCare At Home Hospice and Synergy HomeCare for their compassionate care for Bob.

Robert Alan Gabriel, age 88, of Waupaca, WI, passed away peacefully at home on August 9, 2020 with his long-time loving partner, Diane Handrich, by his side. Bob Gabriel was born on February 6, 1932 in Lena, WI as a middle child to Thelma and... View Obituary & Service Information

The family of Robert A. Gabriel created this Life Tributes page to make it easy to share your memories.

Send flowers to the Gabriel family.