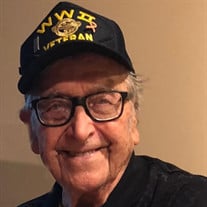 Robert (Bob) James Klima, age 98, of King, WI, formerly of Rhinelander, died on Monday, March 30, 2020 at the Wisconsin Veterans Home in King, WI. Bob was born July 4, 1921 in Oak Park, IL; son of James and Amelia Klima. Bob served in the U.S. Army during WWII from August 14, 1943 until he was honorably discharged on March 4, 1946. After the war, he continued to serve in the U.S. Air Force Reserves. Bob is survived by his sons, James (Mona) Klima and Rick (Lori) Klima; three grandsons, Ken (Rose) Klima, Ricky (Sandy) Klima, and Christopher Klima; and nine great-grandchildren, Dylan, Amelia, Charlotte, Jace, Sawyer, Corrinne, J.T., Lillie and Emma. He was preceded in death by his parents, James and Amelia Klima, and the love of his life, his wife, Nancy Klima. Per Bob’s wishes, there will be a private celebration of life. The Holly Funeral Home of Waupaca is assisting the family with arrangements.

The family of Robert J. Klima created this Life Tributes page to make it easy to share your memories.

Send flowers to the Klima family.