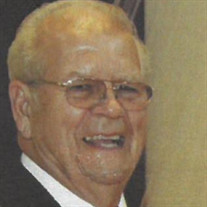 Robert A. Korleski, age 87 of Plover, WI, passed away peacefully on Saturday, July 17, 2021 at Portage County Health Care Center in Stevens Point, WI. He was born on October 28, 1933 in Kenosha, WI, son of Peter and Anna (Kropidlowski) Korleski. On May 28, 1955, he married the love of his life, Adele Warzynski at St. John Baptist Catholic Church in Heffron, WI. Robert worked for his brother, Edward, at Byron-Rockton Saw Mill. Along with his wife, he operated the Wild Rose Tavern for four years. He owned the Friendly Tap in Almond, WI for over 40 years, where he was known for his burgers “Bobby Burgers”. He was a member of the Almond Village Board, Almond Lions Club and Fire Chief for the Almond Fire Department. Robert was a great carpenter and enjoyed fishing, dancing and playing cards. He is survived by his beloved wife, Adele; daughters, Yvonne (Jim) Cummings of Bancroft, WI and their two children, Chase (Megan) Cummings and their children, Molly and Bode and Ciara (Blake) Schultz and their children, Zeke, Sullie, Sosie; Teresa (Kurt) Gutke of Almond and their three children, Kip (Brittany) Gutke and their children, Marley and Josie, Jade (Jeff) Heise and their children, Austin and twins, Cora and Anniston and Madeleine Gutke and her daughter, Isabelle; Cynthia (Dennis) Pagel of Almond and their three children, Jennifer (Joe) Jakubek and their children, Johnathan, Jayden and Jillian, Shelly (Nate) Somers and their children, Easton and Kira, Jordan (Kaity) Pagel and two sisters, Shirley Ostrowski and Barbara Millin both of Waupaca. Besides his parents, he is preceded in death by five sisters, Dorothy Blanchard, Genevieve Koshack, Eleanore Saska, Lucille Kropidlowski and Clara Verette and two brothers, Harry and Edward Korleski. A Memorial Mass will be held on Friday, July 23, 2021 at 12:00 p.m. at St. Paul Catholic Church in Plainfield, WI with Father Andrew Kurz officiating. Burial of cremains will be in Hope Cemetery in town of Belmont at a later date. Friends may call on Friday from 10:00 a.m. until the time of services at the church. Robert will always be remembered as a great husband, father and JaJa. In lieu of flowers, a memorial fund is being established in his name at a later date.

The family of Robert A. Korleski created this Life Tributes page to make it easy to share your memories.

Robert A. Korleski, age 87 of Plover, WI, passed away peacefully...

Send flowers to the Korleski family.