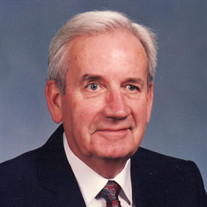 Roger P. Gustke, age 88, of Waupaca, WI, formerly of Mosinee and Lac du Flambeau, WI, passed away on Saturday, March 7, 2020 at Park Vista Assisted Living in Waupaca. He was born October 11, 1931 in Oconto Falls, WI, son of Marvin and Patricia (Carlson) Gustke. Roger graduated from Wabeno High School. He went on to attend Wisconsin State College at Platteville receiving his Bachelor's Degree in 1953 and his MBA from the University of Wisconsin in 1964. Roger proudly served our country with the United States Army from 1953 to 1955. Upon returning home to Wabeno for the first time since serving, he was greeted by his family and his sister's friend, Audrey Ripley. On August 25, 1956, Roger and Audrey were united in marriage at St. Francis Xavier Cathedral in Green Bay. They shared a 63-year marriage until Audrey's passing just 32 days prior to Roger. Roger was a lifelong teacher. He started at Wabeno High School and soon after moved to Mosinee where he enjoyed a 32-year career, he and Audrey raised their family, and many cherished friendships were formed. Roger taught industrial arts, driver education, was a long-time high school football coach, basketball coach, and WIAA referee. He was also active with the Kiwanis Club and past President. Roger enjoyed his time spent up north at Squaw Lake and retirement on Buckskin Lake where he created his own woodshop. He utilized his talents to make furniture for his children and treasured gifts for his grandchildren. Roger stayed active in retirement. His faith was strong and he gave back volunteering with the Lions Club and as President of the St. Anthony's Catholic Church men's club. Roger was a lifelong sports enthusiast. He was a proud owner of the Green Bay Packers and a season ticket holder for 50 years. He attended the 1967 Ice Bowl. Roger never missed a chance to root on his alma mater, the University of Wisconsin, or the Milwaukee Brewers. Roger is survived by his three children, Dana (Ronda) Gustke of Waupaca, WI, Boyd (Dorinda) Gustke of Merrill, WI, and Gina (Dan) Ricci of Cape Coral, FL; a son-in-law Jim (Tayna) Didier of Hortonville, WI; seven grandchildren, Maison (Caleb) Engel of Verona, WI, McKenna Gustke of Green Bay, WI, Will (Amanda) Didier of Cedarburg, WI, Cody (Stephanie) Didier of Fitchburg, WI, Cole Gustke of Wausau, WI, Ally Gustke of Madison, WI, and Dru Ricci of Cape Coral, FL; three great-grandchildren, Harper and Molly Didier, and Stella Didier; and a sister Barbara (Jay) Hansen of Glide OR. He is also survived by many nieces, nephews, other relatives and friends. Roger was preceded in death by his wife, Audrey; a daughter, Paula Didier; his parents, Marvin and Patricia Gustke; a sister, Janet (Iner) Osgood; and other cherished family and friends. Roger will be dearly missed by all of his loving family and friends. The family would like to thank the staff of Park Vista Assisted Living for all their wonderful and compassionate care. A Memorial Service will be on Friday, March 13, 2020 at 11:00 AM at Holly Funeral Home in Waupaca, WI. Father Xavier Santiago from Waupaca will officiate. A visitation will be held on Friday morning from 9:30 - 11:00 AM at Holly Funeral Home. Burial of Roger's cremains will take place at a later date at the Central WI Veterans Memorial Cemetery in King, WI. In lieu of flowers, a scholarship is being established at Mosinee High School.

The family of Roger P. Gustke created this Life Tributes page to make it easy to share your memories.

Send flowers to the Gustke family.