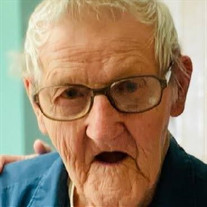 Roger W. LaMay, age 96 of Waupaca, passed away on Tuesday, October 12, 2021 at Wisconsin Veterans Home in King, WI. Roger was born on August 5, 1925 son of the late Paul and Lelah (Anderson) LaMay in New London, WI. He joined the United States Army on May 15, 1945 and was honorably discharged on December 5, 1946. Roger married Luella Regel on September 16, 1950 in Waupaca, WI; she preceded him in death on October 30, 1986. Roger enjoyed building and flying model airplanes, playing Ice Hockey, hunting and silhouette shooting, engineer of his own model trains. Roger is survived by his daughters, Lois (Kevin) Laux of Land O’ Lakes, WI; Barbara (Dr. Rob) Fox of Neenah, WI; grandchildren, Jennifer (Joshua) Solis, Taylor (Taylor Eisenman) Laux, Brian Holly and Erica; great-grandchildren, Arria, Rory and Lionel; also, other relatives and friends. He is preceded in death by his parents, wife Luella, son Gordon, daughter Jane. Private Graveside Services will be held at a later date. Holly Funeral Home of Waupaca is assisting the family with arrangements. The family would like to give a special thank you to the nurses and the staff at Wisconsin Veterans Home in King for their support and loving care.

The family of Roger W. LaMay created this Life Tributes page to make it easy to share your memories.

Send flowers to the LaMay family.